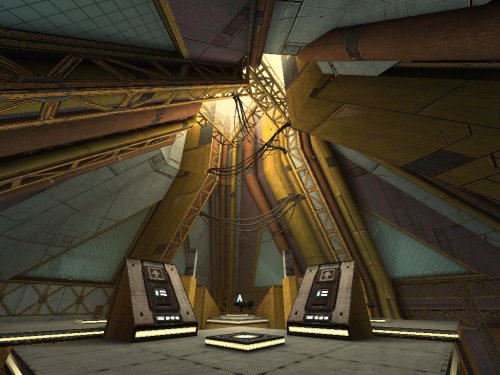 Community map pack based on the Alkaline mod (included), featuring ten base-themed levels in various sizes and texture sets plus a start hub map. Comes with custom skyboxes and music tracks in addition to the new enemies and items from the mod.

There are a few that are below average, but what is great here is absolutely amazing. Stellar maps from people I've never heard of is always great, Paul Lawitzki and Emerald Tiger are ones to keep an eye on from now on. If you play any of these maps, play those.

Plaw's (ft. Ptoing textures) map is the best. It goes first at start.map and that's right. Top level, pure pleasure to play it *All maps are good, not a single bad one. Simply Plaw's touched me the most

These are Really Nice and FUN to.

RadiatorYang's Tell Me It's Raining is a fun wave-based arena map, with a twist at the end for good measure.

DragonsForLunch's North Central Positronics felt good for the first bit, but I found the underwater bit a bit finicky.

I'm a dissenter on EmeraldTiger's Logistics of Chaos - I found the (first half) of the map very easy to get lost in, as all the corridors basically look the same. (There's at least one point where the map tells you a particular named door has opened, and I spent a good 10 minutes combing the entire map to find it.) Second half is far too traversal puzzle for me, and I basically no-clipped through most of it, otherwise I would never have gotten through the level. Also, on skill 0 at least, the combat is pretty slanted towards the hard side - I ran out of ammo several times, and I basically had to godmode through the "final gauntlet* as it's far far too difficult.

As a general comment on difficulty: the supernailgun enforcers ("Lieutenants") are vastly higher threats than mappers seem to think they are - they're both very high DPS and also very tanky, whilst being a smaller target than the usual big hitters in Quake maps.

Subdural Havoc by Greenwood, meanwhile is excellent - there's some storytelling, really excellent tone setting and design in general, and an almost perfectly judged challenge at skill 0.

Escape! by alexUnder is similarly really good at both storytelling and evocative mapping to support that. Not totally sure about the number of enemies in some bits of it, but otherwise thumbs up.

Gentlemen... last time I played custom maps was on AD 1.5 and I got to thank you for getting me quaddicted again ! I began with Tellus Terminus thinking it would be business as usual and I was in for a shock ! Great visuals, great new enemies and very difficult - I played it on Hard and couldn't have done it without saves... I thought the railgun encounter was a bit overkill at first but fighting two at the same time made sure that I really got to know these guys before I was done with them. Good twist on the overlooked Base theme, even if I have learned to love it since the Rubicon packs ! Looking forward to the rest of the map pack, congratulations... great work !

Derelict Freighter by Paul Lawitzki starts out fine and interesting and atmospheric on skill -0... but there's a point where it's just not fun to deal with the monster bursting out of crates. Less monsters (on skill 0) = a map I will finish (otherwise, it's a lovely map).

Collecting my comments from func_msgboard posts. This doesn't cover all the maps, not even all the ones I really liked!, but it's what I got.

The textures, HUD, music, sounds, all really punching up nice Quakey-but-different aesthetic. Love it. Actually getting a bit of Quake 2 from that, in a good way.

Some true Hot Bullshit combat sections in a couple of the maps so far. :-) Big open room with a horde of top-tier ranged enemies spawned in on you, eh, not a fan. Similarly having stuff spawned in ahead & behind in a narrow hallway, or having to shotgun-snipe up at hunters etc. on a narrow ledge overhead. Probably worth it though to get some new mappers putting their hat in the ring and trying things out. None of it is really a showstopper either; it's just kind of a shame to have to cheese those bits.

Getting into some tasty gameplay now too though; the pack has a wide mix. More comments later once I've finished things.

Some confusion initially in Logistics Of Chaos. A combination of it being a bit too same-y looking and being multipathed/open. I decided to just run around following the new monster spawns instead of trying to keep the map in my head, and it worked out. :-) I think it transitions into some different stuff at about the right time.

I liked the level of difficulty on the platforming part -- i.e. not very, which I think is the right approach when you plop a section like that into a "normal" combat/exploration style Quake map.

Getting to work my way into the upper parts of the structure and look down on the old rooms & routes from before, that's always neat. A little annoying if you happen to fall down while dodging a voreball! It would be a pain to make my way back up, but lucky for me my conscience is fine with using noclip in such circumstances to fly back to where I fell. :-)

I admit I was a little concerned when only having one "circuit board" after being in the map for quite a while, but then the remaining ones came in bang bang bang which was funny/gratifying. I would guess that was the point where you decided to scale back on your plans a bit! I think it worked out.

Eh one more quick post before I get back to work. DFL's map was very nice too.

I always appreciate some considered use of water in a Quake map. :-)

Nice varied layout, fun to open it up.

At a certain point I was thinking "well you're kind of overusing the walls-break-and-dudes-pop-out thing aren't ya?" and at that exact moment the entire path broke apart and dudes popped out everywhere. I have to tip my hat to that timing.

DFL has had a really good run over their past few releases!

Nice little horde-waves map from R. Yang. It can be tricky to make a "waves" map that isn't boring or frustrating. The use of powerups and low gravity phases adds variety in this one, and also they both in their own way give you methods of making sure you don't get hemmed in by bad guys (which in turn gives Yang more freedom to pump in lots of bad guys).

The little twist at the end is not super original/surprising but it got a chuckle out of me, it's well-executed, it's really a great way to wrap up a waves map in a way that gives it some character. Feels good to conclude with a little more "normal", more linear Quake-ing too. (I also got a smile out of the REPEATED audio hint on how to proceed. HEY DUMMY.)

BTW, I played this in two sessions and I'm pretty sure in my first session I came across what the circuit-boards were for. In my second session I got all the boards but then couldn't remember or find where/how to use them! Ah well.

Absolutely loved Derelict Freighter (alkjam_plaw). A really big, satisfying area to explore, with lots of foreshadowing (seeing areas before reaching them) and revisiting (coming back to previously visited areas under different circumstances), Nice, tough but fair combats. I finished with 202 of 205 kills and 9 of 12 secrets. Weirdly, never found the double shotgun, which became a problem later on as it's my favourite weapon for dealing with the blue enforcers that have energy shields that only come down when they're about to shoot. Top quality map from (so far as I can see) a first-timer!

Northcentral Positronics (alkjam_dfl) has lots to recommend it, and there is something satisfying about how relentlessly difficult it is. (FInishing with with all 163 kills and all three secrets felt like an achievement.) But there was a slightly grindy feeling to it in the end, especially with all the underwater passages and then the sequence of ambushes. Those last parts felt hard in an unfair way that wasn't as much fun as it could have been.

Subdural Havoc (alkjam_greenwood) is an enjoyable blast through a succession of rather improbable base rooms, with a satisfying cllimax in an open area, where the Trinity encourages nailgun use. Perhaps not especially memorable, but good enough that I played it twice.

Escape! (alkjam_alexunder) benefits from a little bit of narrative, and is pretty hard in its middle section compared with relatively easy beginning and ending. Nice, but not among my favourites.

Superportal (alkjam_daizenzetsu) is relentlessly hard after a relatively gentle introduction. Honestly, after a while, I started to find it a bit old that each new room contained a group of high-powered enemies to be fought with little or no cover. Each individual combat is fun, it's just the repetitive nature of it that drags it down. The ending was satisfying, though.