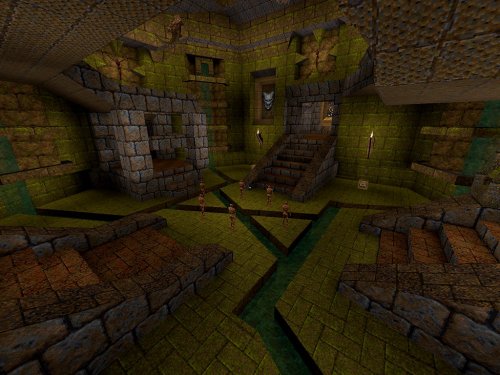 Large lava castle / tomb map for vanilla Quake. Difficulty settings are not implemented and all skill levels will play the same (436 monsters and 25 secrets).

"City Brimstoneburg on Jupiter's moon Io, where teleportation energy was produced from sulfur was attacked by Quake monsters."

The map is a art piece, 5/5 big with loads of combat,shame no skill setting,probley me but got lost a few times lol, but a must play map. Has a kind of the game "unreal" flow to it.Great map "asl"

I had a couple of func posts about this one, copying:

So, I'm about halfway through this one. Hm!

The first thing that jumps out about it, of course, is that it's super big in a modular/cutandpaste way. It just keeps going and going. :-) And it contains many dead-end rooms that exist only to hold a couple of ammo boxes or (less often) a small fight. And there's a lot of empty space.

However, the author seems to have paid a good deal of attention to managing your path with doors, loops, and monster-breadcrumbs -- at least up to this halfway point I've never gotten lost. And even though the visuals are repetitive on the immediate scale, your path pretty regularly transitions through different themes.

It's definitely got a different feel from most other maps being made these days. I was about to say that it's sort of like if you used a time machine to go back and give modern tools to a 90s mapper (before then going on your way to kill Hitler or your own grandfather), but ehhhh that's not quite it. I was impatient with it for a while, but at this point the rhythm and scale of the thing is interesting enough that I'ma keep going.

Finished. Pretty good ride! It's neat to see work from mappers that are (apparently) outside of the community that I'm familiar with... haven't seen Asl on any forum or Discord yet.

I ain't going back through that whole map just to look for tiny red buttons, but that's fine. ;-)

Perfect. For the very 1st map - genious. Just add more detailing and invest in lighting next time - and u ll be one of best mappers nowadays. As for now, yes, it is repetitive, yeah encounters are rather simplistic. But layout in general is very-very good, complex & interconnected. Will be waiting for your next map 100%. 5 starts for now

I had the same error "Overflow without allowoverflow" on QSS 2021-11-13 when loading saved files. Just updated to quakespasm-0.94.5_win64 and loaded all faulty files without a problem! There's a link to 2 faulty savings if anyone is interested in fixing :) https://www.file.io/cjps/download/ZKfV4z8Y5h7n Greetings to Omsk! :)

Had a mixed feeling since it's huge and interconnected with repetitive design. When you can unlock the buttons (25) to access the secret 'level' and travel, it becomes frustrating for me not knowing the progress on switch that need to be activated, you turn and turn around and, in my case, got frustrated ;) It's not my cup of tea, but I recognize that it's really a huge work and give a big applause to the author :)

New member here, first review, great map but took me a few sessions to finish it, died a 100 times not a pro player. Monsters 435/436 (still looking for that last bastard), Secrets 25/25, the super secret is a non-existent map: ASL_2S.BMP, maybe in the future?. Total gameplay 255 min. I would play it again to see the real gameplay once you know where to find the secrets. Last fight was not that hard once you find the Pentagram/Quad combos. Rating 5/5. Thank you ASL.

I have very mixed feelings about this one. Any given area is really nice to look at, and quite fun to play. But there are so many areas, and they are all so similar — and the gameplay is so similar in each of them — that the map becomes tedious long before the end. In particular, the provision of many, many identical elaborate dead-end rooms just feels like the very essence of copy-pasta. It feels like perfectly executed technical exercise, but low on creativity and on soul. The good news is, it's obvious this mapper has the skills to make something much more satisfying.