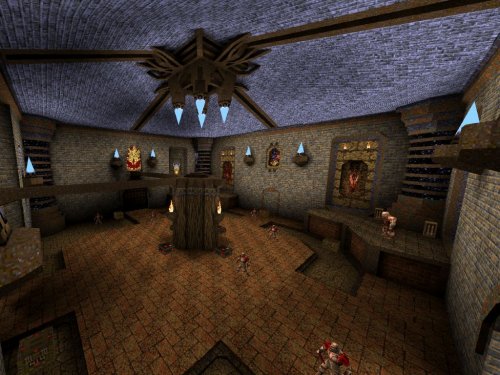 The Monastery of Mount Cinburron v1.0.1

Large "meaty" medieval map for vanilla Quake with wave-based "horde" style gameplay. It uses a mix of mostly id1 textures, with some Impel and Rogue textures mixed in.

"This was my first mapping project, which I started in September. The goal of this was mostly to get used to the basic functions of TrenchBroom, while also creating something potentially fun to play. I had initially wanted this to release before my Sewer Jam 2 submission, but I opted to not release it and instead keep working on it until I felt I had reached a good stopping point."

Some imaginative, fun setpieces in here!

Weapon/ammo loadout in the back 1/3-1/4 or so of the map is at "full power" (skill 2; only found 2 secrets) but honestly in a map with horde-style fights I'm pretty ready for that to be the case once I have a few hundred monsters under my belt.

Some waves felt a little repetitive, but the geometry looks cool and I really enjoyed a few of the fights, especially with a quad.

I admit, i do not like 'horde' or 'wawe' maps. In german, it can be descibed as 'mühsehligen abslachten"... insufficiently translated as 'mind-numbing, dreary, boring slaughter'.... Well, there is an audience for these maps, and who am i to tell people what they should like...

Never mind my prejudice and me being a grumpy old man, i'm giving this first-map a four. The mapper seems to posess a large amount of the qualities that i admire most in a mapper: imagination and creativity. And he/she(/it ?) certainly learned the editor in the process...

With a more conservative population of monsters - and perhaps a little more play with details and lighting in some of the more square rooms - this would have been a solid five for me. The architecture here is really good!

Again, a mapper where i expect to see greatness in the future! Very well done! Thanks for your work, and thanks for sharing! :)

This Map was very much fun to play for me. I liked the design and the wave challenges. Overall didn't felt to hard for me on skill 2. Most waves solved 1st try. I just found 6/14 Secrets - I wonder what I've missed. Sidenote: I played it with the "Block-Quake" mod, which felt like it's meant to be. Looking forward to more Maps by this Creator! 5/5 Stars.