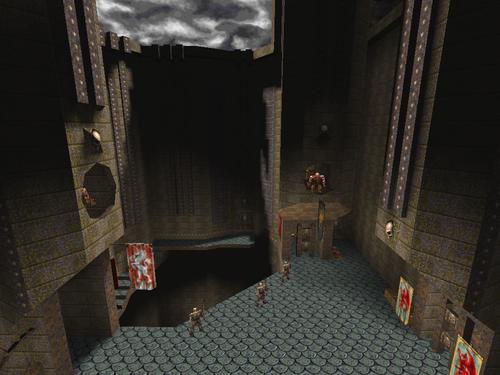 Large Metal fortress with a dragon boss fight and a few other custom progs.

3/5 with 21 ratings
You can NOT add ratings
if you are not logged in.


JohnNy_cz 3 January 2012, 23:11
Really didn't like this map, too claustrophobic and at one point I didn't even know how to finish it, which happens REALLY rarely to me. Might be some random bug tho.
hkBattousai 6 May 2012, 11:09
A very irritating map. That "shoot to form the bridge" part was too ridiculous. Reservoir dogs mode is disabled. Secrets are impossible to find. This map made me feel real bad.
Qmaster Registered 6 March 2013, 0:14
Secrets were insanely hard...alternate ending was a good idea though. The overall map was rather poorly constructed. Definitely a first release.
MikeTaylor Registered 13 June 2014, 16:48

These comments seem very harsh to me. There's a lot to like about this map, although it's true that it's very difficult. even on medium. The final fight with the dragon just felt like a test of endurance and luck.

I had to cheat twice to finish: both times in the lava-pit hall. First time when the bridge came up out of the lava, but wasn't where it appeared to be. I got bored of trying to jump on the invisible area and flew across instead. Then immediately after then, I just couldn't figure out how to get across at all, so I flew again. khBattousai (above) says something about "shoot to form the bridge" -- how is that supposed to work?

Qmaster, what is the alternate ending?

I was only able to find one secret -- the one where you drop down onto a narrow ledge at the far right end of the chamber with the E1M2-like walkway over a canal of lava. Where are the others? How can I fall down to the red armour below the final fighting area without being summarily killed?

Thanks Mike! This was my first release beside a turtlemap and it has some problems today. I think the raising platform that isen't where it should be. Is because it has been given an angel when I build the map.(don't know why!) This behaviour only shows in newer engines after Fitz .85 I think it was.

You can see the secrets of the map here:

it was cramped , but the architecture was nice. i figured out the shoot buttons for bridge part after about 25 shells. tough on skill 1. lots of saving & loading. still enjoyable to me.

the secrets i missed are the sarcophagus and the four skulls. thanks for posting your secret list. i'm going back in to try the alternate ending!

My 20 rockets and a few dozens of bullets weren't enough to kill the dragon, so I had to finish him off with my axe in god mode. :P

I usually am a sucker for metal maps but this one didn't do much for me. Feels kinda like a poor man's Tronyn map. It's not bad but suffers from problems other than the displaced platform mentioned above, which can easily be solved by jumping in the middle of the pillars where it very visibly should be.

Generally too cramped and has some issues like damage impossible to avoid in some ambushes, monsters not aggroing if you shoot them when they can't see you, no infighting or passages closing when they really shouldn't. More specifically, when the dragon showed up, I rushed to get the pent. Problem is, the opening in the tower was now closed so I had to wait for the lift to come up, pause at the top and go back down again so I could ride it, wasting precious seconds of protection. Oh also, I'm not sure if it was intended but when the dragon sets you on fire, the flames never die out unless you pick up a medkit, and there aren't many of them in the arena. And it's a bit too easy to fall in the lava below when you're busy looking up and trying to avoid sustained dragonfire. One last thing, I think the sunlight is just a little too bright and could use some angle for nice shadows in the exteriors.

I don't know what the others are on about "difficult" secrets and that extendable bridge. I'm not very good at finding secrets but found most of them, except the GL one, without any help. As for the bridge, the clues are there right before your eyes, it's really not that obscure.