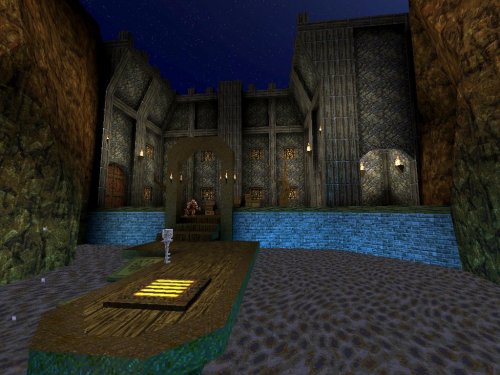 Two small maps, a classic-style base themed intro and a castle themed conclusion. Uses custom music by Angryfrogs, custom skyboxes by Makkon / Sock, and some id1 and mg1 textures.

No custom start map or difficulty select is included, so use the console to load ("map lb_fall01") and configure (e.g. "skill 0" is Easy).

Short but sweet. I liked both designs. In the first map if you jump from the big crate where you shoot the button down behind the two smaller crates, you'll get stuck. Had to use noclip to get out of it.

Especially the second map brings memories of the original ID castle maps. But both are well-designed, competent brushwork with lights and local sounds used to good effect. The rather understated music underlines the mood nicely.

Small maps, but they don't feel easy - nor too short! My compliments!

I hope to see more from this mapper. Thanks for sharing!

Definitely want to see more from this author! Thank you for sharing with us.

Enjoyed both maps very much. Found them a little easy on skill 2. Loved the music of the second map. Thank you very much.

What do the .lit files do?

And do I put them into maps/Lits or just maps?

Mistawright in maps with the bsp - in an engine that supports it, it will enable coloured lighting

It's a great maps! Small but Stacked. Every room is interesting and going from a Base to a courtyard lookin area is great in map 1. The second map was great as well and the visuals at the end of the it (that portal to nowhere and its cracked walkway) really stuck with me!

The music really tied it all together as well

Quite an enjoyable little map pack. Aside from a couple of misaligned textures I spotted, the aesthetics are proficient in terms of brushwork, texturing and lighting, quite id-like. Enjoyable spaces to explore, overall. If I'd have to choose between the two levels, I think the first one would have to take the cake. I like the moody lighting and the fairly intricate brushwork. I also preferred the music track of the first level. The second track was also nice, but the cheap midi-sounding brass instrument was a little bit distracting.

In terms of gameplay it was alright but could've used some more balancing. I played on hard, and it was rather easy. It was quite trivial for the player to retreat from an ambush and then take out the monsters one by one. Some care could've been taken to push/pull the player into the fight. And even if I had decided to stay in the middle of the arenas, the opposition was on the lighter side, especially considering the equipment I was given. For hard difficulty at least, I think all the yellow armors could've easily been replaced with green armor, for example.

Besides the combat balancing, there were a couple of issues with monsters telefragging each other, and on one secret it looks like it's possible to grab the item without triggering the secret. Other than that, I didn't spot any technical issues.

All in all, a pretty solid map pack, and with both architecture and gameplay weighed together, I think I'd rate it somewhere between 3,5 and 3,75. I'd definitely like to see more from the author.

Both Maps are well designed. Buttons and pathway are self explanatory. Not hard to beat on first run, with skill 2. Would enjoy a whole episode of castles by you :)

There isn't very much to these maps. But what there is, is really nice. Pleasantly laid out, interestingly inhabited, detailed without being over fussy. I'll be interested to see what this mapper comes up with next.