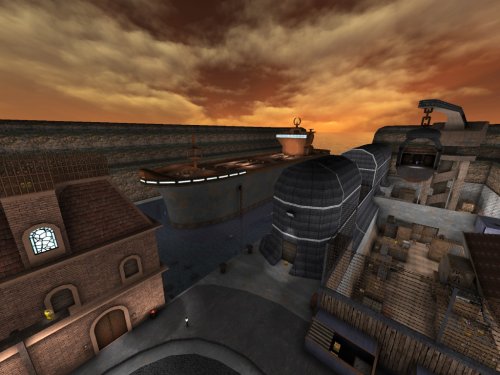 UPDATE, 12 September 2022: new version v1.1 has some updated textures, redesigned fights, and other tweaks. You can download v1.1 here.

Large industrial dock-themed map with lots of exploration, using Makkon and MG1 textures. This is an updated overhaul / redesign of the author's previous release Null Bearing (2020). Map source is included.

"12 red squid statues have been - moderately - hidden throughout the map. Break them all to gain access to the super secret. [...] Some fights can be initiated from different vantage points, some of them advantageous."

4/5 with 15 ratings
You can NOT add ratings
if you are not logged in.

Play it. It's very-very good. And don't forget to play next Zbidou "water series" map! 5 stars

I dont know if its me because im thick, found this map very confusing and many back tracking and so forth, took me ages to try and find a way into a building, all doors saying opens on other side. Had to rocket jump over a fence to get to a ladder to side of building, if thats the right way, im not sure.From then on very confusing, loads of buttons to press, getting lost everywhere, on and on and on, gave up in the end.

Even though this is a remake, i have given quite high points here...

High realism (if one can say that in Quake!) very good brushwork, some of the ideas from he original map further expanded, mood set with lighting and sounds... This is good.

Monster placement is the weak point of this map. There is way too many monsters that 'beam in' right in your face. It just doesen't go with a realism/exploration map. With all the details of this map, there is good potential for bringing in reinforcements out-of-sight. And... some monsters can just be picked off from far away.

All in all, very well done. I really like this map! :) Thanks for your efforts, and thanks for sharing!

Same feelings as Ninja. Gave up in a room after pressing a switch and then pressing the other two with a "denied. pumps still active." message. Can't find what to do from there and quitted after 10 minutes of going nowhere.

Orl posted a playthrough on func message board. I won't take the liberty of posting the link here, but you can check it out there.

Apparently, infighting has been disabled for all of the monsters. Not a super-fan of that, considering the already above-average encounter difficulty.

Well, taking in account the absense of infighting and about 500 of monsters... When you end this level you rather say "at last" instead of "what a nice map it was" :(

Why monsters dont hate each other on this map? It was a very important part of gameplay. When monsters never shot each other, gameplay is poor(

FYI an updated version will be released shortly.

Is there an console command to re enable infighting? Thx

FYI a link to the updated version is in the "tracking new releases" thread.

Do you want a new page for v1.1, or just a link to the new download in the page description here?

A new page would be overkill, updating this page will do just fine. Thx for asking !

Be aware that users of the Quake Injector or FTEQW or MarkV would not be able to install the 1.1 if it has no entry. Every release needs a entry really.

Updated version still no infight. @zbidou72, are you trolling us? It is no fun to kill each monster manually by ~5 shotgun shots!

@spirit thx for the heads up. If creating another page is not too much of a hassle for you, why not.

@Vasya there are more cost effective ways of trolling than mapping. 1.1 addresses some issues that were detailed on another website, the absence of infighting was not one of them. However since I'm a nice guy I will make an "officious" version of this map with infighting re-enabled, next week, and post it on the func message board, for those who like it better this way.

@zbidou72, thank you, it will be very nice! Playing without infighting is the same fun as map where each monster has double hitpoints. May be someone like it, but "fat" monsters (instead of big bloody monster army) really is a weak place of Q1 game-design, and it was the compromisse on 1996 year Pentiums which could not draw a lot of 3d-models.

Well, this is really hard to rate! It's epic in scope and very satisfying to progress through -- especially when you finally reach, for example, the top of the crane that you can see literally from the very start, and which looms over much of the action. A lot of the combats are really, properly hard, and call for strategy as well as action.

So far, so awesome -- a definite five-star map, right? Well, no. Because time and again I found myself asking whether this is actually fun, and finding that too often it was not.

Too much of the difficulty is brutal, and even luck-based: for example, does a vore happen to spot you, as you make a dash over open territory, soon enough to launch a ball at you accurately? This happens especially frequently in the combat in the yard that you emerge up into from a manhole, and which eventually takes you to the teleporter that reaches the top of the crane. I reloaded that one combat somewhere between 50 and 100 times (from a sequence of save-points), most of them through no fault of my own. Getting through that battle was a relentless grind, and although it was hugely satisfying to finally complete it, it was most of all a great relief.

Another major downside to the combats -- as The Pirate has noted above -- is how often they rely on suddenly spawning enemies. This doesn't fit the realistic theme of the map and often feels simply unfair, especially when monsters appear on all sides at once.

And the last big downside is the elimination of infighting, always one of the key tactical manoeuvres in big Quake battles. I get that @zbidou72 wanted to do something different, but I don't think this is a good choice at all, as it amounts to removing a much-loved mechanic.

Navigation is clearer than in the old version, but still often very unclear. I never found my way back to the yard with the hardest combat, despite returning multiple times to where I thought the entrance was. When I extended the ramp to the ship, I was told "Shortcut available" but had no idea where. (I found it much later, quite by mistake, under the ship.) More signposting is definitely still needed.

So this is a really mixed bag of things that I love and things that I hate. Three stars is probably fairest. But it's frustrating to award that, because it's so close to being a five-star map. It feels like it just needs some tuning and it could be on the same level as the same author's awesome Temple of Teuthis. Anyway, it leaves me really excited to see what zbidou72 does next!

Oh, and I should mention: playing on Hard, I got 401 of 402 kills (dammit!), 9 of 14 secrets and only 7 of the 12 squids that unlock the super secret. Doing that took me 123m10s (i.e. over two hours) but that does not include any of the hundreds of aborted attempts at certain combats, so the total time was probably double that.

@Mike Wow 2h is a long time. 402 monsters on hard, you probably played 1.0, 1.1 has 397 and that very tedious encounter in the drydock has been redesigned, the flow vastly improved. I agree that in its 1.0 state this fight was a deal breaker, got a lot of feedback for it and adjusted accordingly. As always thx for your precise description, and you're right, beyond technical concerns the way a map "feels" is very important.

I played v1.0 back when it was first released, so the comments below especially about combat apply to that version.

Big points for ambition and setpieces! Quite an adventure, and the Alkaline monster set serves it well.

Like I mentioned in the Slipseer discussion thread, a couple of the big outdoor fights were annoying for me (on skill 2 FWIW). I.e.: Cross an invisible line, get spawn-in-surrounded by melee rushers (fiends and axe guys) and snipers (vores and railgunners). OK, need to move. Moving crosses another invisible spawn-trigger line, rinse and repeat. This leads to just a bunch of savescumming and cheesy play to get past the area.

The big fight around the gold key also required some save-reloading, but I enjoyed that one. Partly because it was the last fight (so no need to get past it to other stuff) and partly because there was more room to move and fewer arbitrary triggers. However the fights that were (I think) out back of the "harbor office" and in "dry dock", essentially in big outdoor crate-filled zones, were kinda bullshit IMO. On each one of those I had a brief think about whether I should just punch out and leave the map unfinished.

In the end this was a pretty special experience that also had some un-fun parts. That's the way it goes sometimes! I did enjoy Temple of Teuthis more, both from a theme standpoint and also in its puzzles and combat. Still this one is an interesting map worth the touch-up that you gave it.

(P.S. I didn't find three of the collectible macguffins so I don't know what other secret or thingy they might unlock.)

(P.P.S. Every time I see the map name "null bear" it sounds like an AD&D monster or an SCP entry.)

A link to the updated version(1.2), with infighting re-enabled, is in the tracking new releases thread.