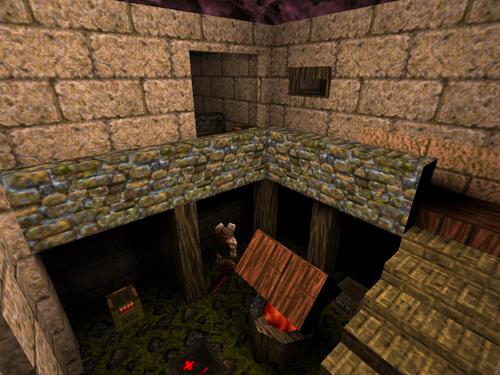 If it weren't that cramped it would be a decent map for its time. Can give some fun moments.

Be warned, sometimes it isn't completely obvious where to go.

Not bad. I haven't problems with solution. Yes, it's cramped, but I think this is a feature. The design is well, maybe a little bit cubbish, the gameplay is pretty decent.

I think the addition of furniture and stuff like wells really make the castle feel more alive and interesting. The brushwork is kind of botched, with brushes sticking out of surfaces and walls having weird holes. The central room also has doorsteps that are impossible to traverse without jumping, which is a little annoying.

However, the map is fun, which is what matters in the end. The gameplay seems balanced enough even if the map is cramped.

This map even though is cubish and very cramped is interesting to play through and is built with good brushwork and texture design. Overall a quick quake map that is worth a play through and it gets a three out of five rating from me.

IMO there are several things that hurt this map's gameplay: -While the architectural is probably realistic for a small real-life fort or castle, it's very cramped by Quake standards. -As Esrael mentioned, the brushwork is sometimes unruly. -The beginning and ending rooms feel tacked on. -There are no secrets, although there's one quasi-secret.

Nonetheless, this is notable for its creative, sophisticated use of space. While progression is linear, most of the rooms are multi-story, with balconies and alcoves hanging above the ground floor, meaning the player often visits and then revisits the same rooms in different contexts. Matthias Worch built some of Beyond Belief's maps in the same way a few months later, but when this came out, it was pretty unique architecturally. I would rate this 3+/4-.