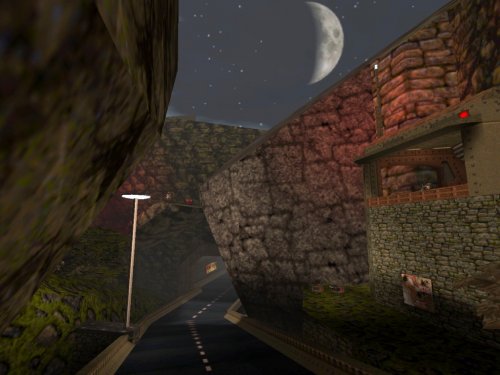 Large base themed map surrounded by cliffs and caves, an adaptation / conversion of the level "Mountain Gorge" from the game SiN (1998). Originally presented at the 20th anniversary QEXPO 2016 (via qexpo2016.com).

"... the improvements of the Q2 engine like turning lights and raising lava isn’t possible in Quake. Also it wasn’t possible to rescale the level, as a quarter size would have been sufficient. After several proofs with leaks I decided to take the scale for granted as it covered up the demon fiends in good conditions. Flavoured up with some animating statics it serves up well for 20 years of Quake. Plays as easy as a corned taste of popcorn."

After unzipping to /q1gorge/, start manually via console: "map q1gorge"

Well, here you see an old mapper at work...

Absolutel nice brushwork and texturing, animations just work, map entertaining and playable and so on and so forth...

I won't comment on the idea of the map (as it appears to be nicked from another game) but if i have to be just as much of an assho.... ehrm, just as supportive of Madfox as of the new mappers, there is a few small bugs:

...Well, apart from the tree, you really have to look for most of these things...

Very good and enjoyable map. Up to the standard we can expect from this mapper! :)

Thanks for sharing. And i look forward to see whatever it is that Madfox has cooking in his editor...

This was a fun map to be sure. Not a lot of challenge on skill 2, but very enjoyable.

Some nice idea, with some different approach from usual, It has some flaws and at the same time it was fun an interesting

Well, this was a ton of fun. Lots to explore, some alternative routes, a lot of combat, and perfectly judged difficulty so that I was often low on health, but rarely felt it was for unfair reasons. Yes, it's a bit blocky, and the lighting is mostly bland, but games are for playing!