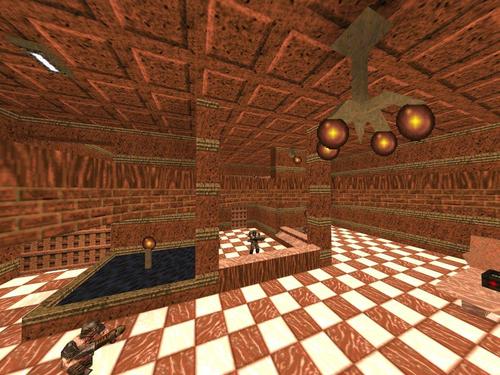 2.1/5 with 9 ratings
You can NOT add ratings
if you are not logged in.

Someone must have been having a bad day while writing the editorial descriptions of DAV's maps (at least this one and qktower).

This map starts off in a rather nice representation of a metro/subway (hence the title), after which you proceed to a skyscraper (probably an office building), the upper floors of which are still under construction.

The textures do not always complement the setting too well (as with DAV's qkdme1m1), but I suppose when sticking with stock Quake textures, one's options are limited (the same can be said for the sky). A lot of it is also fullbright, which tends not to look good -- but here it is arguably understandable, as the interiors are lit by fluorescent tubes, which provide ugly, overly bright lighting in real life too. Still, even fluorescent lighting in an office block is not completely uniform, and slightly less uniform lighting would have looked better here. Perhaps at least one malfunctioning, flickering light would have provided a bit of added character and visual interest.

The initial underground section is by far the strongest area of the map, but once you move upwards and visit the skyscraper, things get a lot less visually impressive. Case in point: the current screenshot is of the entrance to the skyscraper (and hence a very unflattering representation of the map). Compare it to a screenshot of the metro section: http://www.davlevels.com/qklvl/qkmetro_b.jpg

Gameplay is ok, but not terribly exiting. This map seems to be primarily focussed constructing a modern city setting within Quake; monsters come across as a bit of an afterthought.

Spirit/negke: the link to DAV's homepage (here and on the pages of his other maps) is outdated. The current address is http://www.davlevels.com/

Actually, having looked at it again, I'm not sure my comments about the lighting are technically accurate. Still, I think it is too uniformly bright in most areas.

I've been planning on reworking the descriptions for all qk* maps, because they don't really do justice to the levels. Most of Dav's maps are bland and/or have terrible lighting, but at the same time they all have an original and creative touch to them.

I found this pleasant enough, but it was greatly undermined by being so grotesquely underpopulated. The map could easily have supported three times as many monsters, and would have been much better for it.