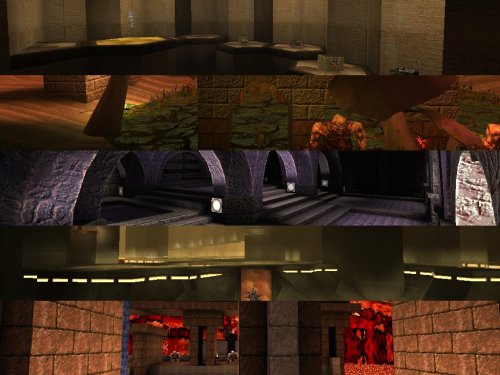 A pack of 6 levels made in 48 hours for a community speedmapping jam where participants had one day to make textures, and then one day to make a map with only those textures. (Textures by ZungryWare, Chris Holden, 4LT, ish, riktoi, wiedo, JaycieErysden, iLike80sRock, quasiotter, therektafire, and MissLavender.)

Just wanted to say that I really like the start map in this one, good job ZungryWare.

This is in the better end of speedmapping! I must, however, air a lurking suspicion that a couple of these mappers may have had some prefabs stashed away somewhere... ;) Very well done, and thanks for sharing! ...I better get back to this. There are a few corners i failed to check...

very good speedmapping. it was very fun and enjoyable.

Another great Jam! I loved the start map which was properly themed with the paint bucket and brush.

This is a pretty amazing (especially considering the time constraints!) collection of maps and interesting to play.

Thanks again to everyone who contributed to the jam! I had a blast playing the maps!

I liked the new textures well enough but the most memorable part was the start map with themed warps. Gameplay was OK, nothing groundbreaking. Not bad.

Hivebind (sm216_4lt) is a great start -- a completely new idea (to me at least) of putting Quake on a hex grid instead of orthogonals. It works well, the map giving some satisfying combats as well as its gimmick, and a progression that makes sense. I didn't have any trouble identifying the buttons, which can be a problem with new textures.

... raining ... (sm216_coce) is much less to my taste: a horde combat where you don't get much say in when and how you get to fight, you just have to deal with it. Not my cup of tea, but some will love it. I will say this for it: the difficulty was very well judged: on Hard, I spend most of my time low on both ammo and health, really struggling to survive. I did make it through on almost my first try though. (I say "almost" because I blew myself up grenading a too-close fiend, but I was fine after restoring to just before this foulup.)

Justified Paranoia (sm216_chrisholden) was already my favourite so far, even before the gratuitous but joyous "Let's have some more fun" coda. The texture set is good and atmospheric, even if the walls are a bit unvarying. The combats are fun and fair, and can usually but not always be taken fairly strategically. And the quadded final sequence is just a joy.

I am out of patience with super-hard maps like The Color of the Sun (sm216_ish), in which I had to cheat (fly) just to get out of the opening area, only then to find myself surrounded by enemies with nowhere near enough ammo to deal with them. part of me felt I ought to give it a proper try; another part said "Heck, no, you're supposed to be playing, for fun." I listened to the second part and bailed.

In reality we had more than 48 hours to make the maps, closer to 72 or more. The textures are interesting and varied, mostly on medieval and abstract themes.

Chrisholden: it is a map repeated once, made out of horde combats and modular brushwork with many curves for eyecandy, has several instances of getting stuck in geometry, and can be very boring on combats due to when the enemies aggro.

Ish: has many interesting ideas, but has several deathtraps unavoidable on the first run, and the first one can only be avoided if knowing an obscure jumping trick.

Newhouse: does not load in any of the custom engines i tested it in, due to issues with brush entities during mapping.. I think it needs an engine with bsp2 support, too.

Zungryware: very novel and interesting idea on a very long map that could have been a release on its own. Brushwork is speedmap-like, combats are straight forward, but there is several instances of enemies getting stuck on doors or, due to the idea behind the map, the player can run out of ammo on the first half for some people, which is unavoidable in this kind of maps (like it happened on my sm181 map) save if littering the map in ammo boxes or using mechanics similar to the glory kills in Doom 4. I am under the feeling that not all the secrets can be reached on the same run. Remember to save from time to time as it is not that hard to fall into lava due to a player's mistake.

*MikeTaylor: Truth to be told, the player can control when and against who he is going to fight in my map, but it is done in a way that even I, the author, won't know on the first attempt, so even for me the map can be fun even if played or tested more than once or twice.

For some reason the sky looks really weird in "The Color of the Sun" (ish) when I try to run it through VkQuake. No such problem in The Rocket Crusade.

Any idea what could cause it and how to fix it?

Instead of reddish sky with clouds I get beige plane with holes in it as the foreground and weird plane with dots as the background.