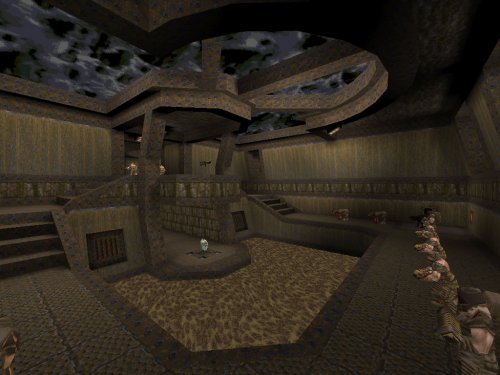 Seven small / medium classic maps made in 1998-2001 by Peter Bisseker, also known as Tiddles. A variety of themes (base, rogue brick, wizmet) in an early yet distinct style.

All levels were released separately, but were intended to lead into each other. This release is a modern repackaging by historical map appreciator Greenwood, curating all of Tiddles' single player maps together into a convenient episode. Three curation notes about this release:

1. Base X2 has been repurposed as a start map, and does not have built-in difficulty select. Make sure you manually set your skill level via console, e.g. "skill 0" is Easy.
2. The second-to-last map Garrison was supposed to lead into a last map called Rift which ended up being a deathmatch map. So instead, Greenwood has swapped in Jackboot Hero as the last level (renamed it as "rift.bsp") which perhaps makes for a better ending anyway.
3. All the maps have co-op spawns / are co-op friendly.

Very very recommended to all fans of classic Quake. Encounters are very brutal. Maps are small by modetn standarts. But damn the layout is good, really good. Intricate, twisted, looped. Really fun to play it. Polished work! 5 out of 5 for sure

I realise this is not the right place to ask, but if Greenwood's reading this, I'd like to suggest repackaging Leafface's maps into a proper episode as well. Although far from flawless, those maps deserve the same treatment.

Lovely maps of a millenial disposition with a nice stacked-boxes aesthetic and a propensity to reveal large groups of enemies in pill boxes & far away visible through long corridors. Notwithstanding the off-style inclusion of an ancient stone complex towards the end, the sequence works well and it's nice to have these packaged as an episode.

Really fun maps. Short and sweet, with tight corners. I love the change of pace - feels like Quake, but a bit faster and more frantic, due to having almost no secrets.

One complaint - clearly the maps were designed to be played with single shotgun start, but as they're packaged together, you end up keeping your weapons and ammo and armor, so the maps become super easy.

Yeah the weapon progression has the issue mentioned above, but overall I'm glad these were packaged together... I think it does truly help the feel of these relatively short maps to have them in a chain instead of isolated. Good nostalgia trip.

Amazing little level pack, especially for its time. The sky recolor was definitely a surprise to see in a release this old. Definitely wish Tiddles had included some more secrets, these maps are pretty brutal even with weapon transfer (at least, on Copper nightmare - I'd imagine they're easier on regular). Greenwood has done a fantastic job on the repack, and these levels can now be enjoyed again almost twenty years later in an easy to play format.

Some nice geometry, especially in ceiling detail. With all the fights against groups it would have been fun to get the quad more often. "Jackboot Hero" requires a ramp or rocket jump to finish, which I don't hate but should have been conveyed more clearly.

why not include the dm map with the pack?

Excellent job, Greenwood and thank you for putting these maps together! It would be interesting to see what Tiddles thinks of it, although I'd bet he'd be honored to have his work remembered this way.

Here's hoping to see Greenwood package up more authors' maps in this fashion.

Very good maps! But too much ammo in places it looks silly.

It also works great with Copper