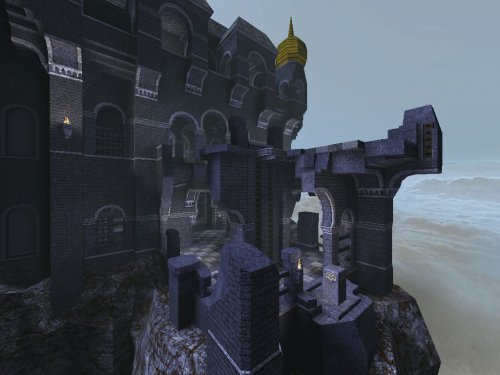 Wow, is this an expanded version? I don't remember the ruined area in the foreground. Going to check out the fascinating-looking writeup right now!

@Tronyn, yes this is a different version. The map has a new skill area, an extra 3rd SK door choice, rebalanced HP/Items and the original idea of the level loop fully implemented.

Still boring to play, the improved layout doesn´t add to the map at all, its sad..

So where's your map Phil?

Why does Phil need to have made map, to have a legitimate opinion on this level?

Thank you very much for the map - it is beautiful. But the walkthrough is quite sophisticated. Moreover, you have to start from the same location with the same monsters. This is quite boring.

Unlike some of the other commenters, I found this more fascinating than boring, although replaying the same first-bit-of-the-level repeatedly was certainly not the highlight.

I found it disappointing that in the end I exited the level with only three of the four runes. I feel like I missed one of the three branches of the main map, and was prematurely sent to the end-game map.

What did all the loose bricks do? There was a message about something happening deep underground but I never found it.

All in all, I have to describe this level in the words of Andrew Rilstone, in his review of the 2003 movie Hulk: "The whole thing doesn't quite work, but it's the sort of failure one would like to see rather more of." It's amazing, and delightful, that nearly 20 years in people are not merely doing marvellous things with Quake, but new things.

Off to read Simon's long commentary on the level now. Simon, do you have similar pages for other levels? I couldn't find them.

I am not sure why everyone is complaining because the player only needs to play the first part (two rooms) of the level twice and there are plenty of secrets to find in this area. I also setup alternative ways to fight in the first large room (upper area, SK platform) and various ways to get weapons (SSG/GL) early.

The player can ONLY open two out of the three SK doors and one will always be locked. This is by design, the map is about route choices having consequences. The idea is the player picks the weapons they like (there is a grate above two of the SK doors to help with the choice) and the weapons are then made available for the final fight.

"What did all the loose bricks do? - It is a mega style secret (special cave area) which is my sarcastic joke about the 'its under the lift' trope of Quake level design.

"do you have similar pages for other levels? http://www.simonoc.com/pages/design.htm - Down the right hand side of the page is a list of all my Q1 SP maps with extra map waffle and more screenshots.

I can't believe I missed all those links on the RHS! Thanks, and sorry.

I wasn't so much complaining about only having gone through two of the three doors, as wondering whether I'd completed the map in the right way -- since, as I said, I only had three of the four runes.

Sorry to be dense about the mega-secret, but ... where is it?

Simon, I am sorry, I am quite a casual player. Perhaps your map is dedicated to thorough exploration. I found just quite a few secrets. And enjoyed it. ;-)

Thanks again for the map, I replay it from time to time. It just makes me wondering about internals of the building and I can't withstand the wish to explore the map with noclip. ;-)

Is there a chance to see a map based on The Florentine Library?

Hi guys.. do you think these recent mappacks could be playable with my PII 400mhz 128ram ? I ask because I strongly like to play them upon it !

Great map. I've previously played Tronyn's ikblue map from Map Jam 2 (the other one I played was mfx's ikwhite one), which was good, but this one had more of the classic feel of the original IKSPQ series (which is still well worth playing, btw). I also didn't mind revisiting the first area at all, as I found new secrets each time and the area is big enough that the fights can play out a little differently each time. Anyway it doesn't take too long for an experienced Quake player to get through it.

The very-ending fight before the final teleporter was a little disappointingly easy even on hard, but I guess taking out a shambler and a vore used to be harder than it is in 2014.

I did not find the super secret, maybe it was in one of the pools behind the silver key I didn't go through? I'll definitely be playing this again sometime, anyway.

Managed to play this one again. Loved it even more than the original. Yeah you have to play through the same beginning bit several times but it's still fun. It seems the enemies were different in certain situations. Not sure if this was my imagination or not (sure I had 2 vores at the end on one fight and then another time it was 1 vore and 1 sham)....

Have to say this was a really unique map. The sealed off routes does promote some replay value and the architecture is just mind boggling!

I think the choices could have been presented a bit better instead of going onto the floor above and looking down via a grate. Maybe a window instead?

A wonderful map full of clever tricks and creative reuse of areas. Excellent use of the ikblue texture set, and I really enjoyed the progression mechanic built around the runes.

Like Mike, I was a little disappointed to finish with only 3 runes (at first, I thought I had broken the map). To be clear, I am okay with forcing the player to make a choice and leaving some branches of the map unexplored. But the map asks you to start collecting runes (of which there are four) in order to open a door with four runes on it, so I had mentally prepared myself for collecting the fourth rune.

But that's a minor quibble; the map is fantastic.

Just saw the new tag, "fs". What the hell is that even supposed to mean?! Tags are normally made to be understandable, otherwise they're kinda pointless...

Interesting concept for a map... Wish game play was longer and more challenging.

Interesting concept for a map... Wish game play was longer and more challenging.

I loved this map. I'm surprised to see so much negativity in the comments. Absolutely 10/10 without a doubt.

I avoided this map just because I was certain I had played it as part of the Arcane Dimensions mod. But no, I had it mixed up with The Realm of Enceladus. Downloading now :)

sock, this is a masterpiece of a map. I only just realized that you did a writeup for this map and I can't wait to read it. I loved everything about it: the combat, the scale, the runes and multiple pathways mechanics, and so forth. The source of the healing pools was really clever and it caught me off guard.

While I loved the combat, it was hard to fully enjoy it because I spent so much time marveling at the architecture and the texture selection. I had fun finding all of the secrets, especially the loose bricks. I only wish that the player got the option of playing through both silver key pathways. I noclipped through one of the silver key doors in order to get the full experience.

This is a map for studying closely and the fact that there's a writeup is an excellent bonus.

This map confused me. Going to the locked doors told me I got the rune, but I didnt have the rune (didnt even get inside the locks). I killed the Vores and Shambler at the end then teleported to e4m4?

A classic level marred by a confusing and yet inventive new mechanic. Combat is quite claustrophobic at the best of times, but when it shines it really shines.

The map is truly visualy pleasing. Played with pak1 just for some time because then it crashed and I couldn't load it without crashing again. I set the difficulty to nightmare from the start. Some people here said they needed to pick up 3 runes out of 4. I remember only needing 2, thus completing 2 paths and fighting my way to the final portal. I was entertained enough to give this 4/5. There's a chance i'll try the other paths later.