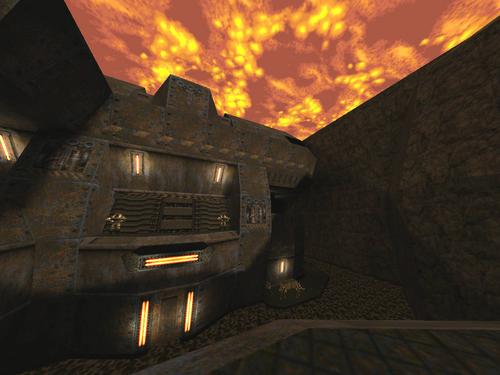 Results for the second 100 brush mapping competition. Contains 10 Quake Single Player maps, all made using 100 brushes or less. Includes a start map to access them all from.


affine Guest 30 September 2012, 18:38
Really good stuff :D czg's map featured in the screenshot is top notch. The others are fun, even though they are much more evident of speedy mapping skills.
Icantthinkofanickname★ Registered 6 August 2015, 15:51

It's amazing what some mappers can do with only 100 brushes (or even fewer!), and I would say the top three are all nice, fun maps regardless of brush count, -- and really astounding when one takes into account that they were each made with a maximum of 100 brushes. And even having said that, Biotoxin is simply in a league of its own.

My personal ranking would be:

The included start map is a great bonus. It looks good, and I like the way it is laid out (even going as far as to include an appropriate entrance for Titanic!). It's a pity that not all the maps link back to it, though.

The included readme is also interesting. It's nice to be able to read the judges' assessment of each map. There's no accounting for taste, but still -- I'm surprised to see that in their "personal rankings", two of the three judges gave Biotoxin a lower ranking than #1!

The Secret Castle by Aardappel is pretty astonishing: a legitimately big map in 100 brushes. OK, it's a bit crude to look at, but it's a blast to play. It would be impressive even without the titular secret castle, but with that in as well it's amazing. A great achievement, and not one that I've seen replicated in any other 100-brush map that I can recall.

Cenotaph Of Seqqarra by Rcktrob is another superb piece of work: much smaller, but beautifully decorated and with very enjoyable gameplay. An excellent pair of maps to get things under way.

Amazed there is only 100 brushes in each map !

Tried running the game with given parameter in the read me file and only normal Quake keeps running... I am using Steam. Any suggestions?

Never mind, figured it out. Played through all the maps and I have to say, I was not that impressed. Most of them were very mediocre. I liked how they were challenging though.

Never mind, figured it out. Played through all the maps and I have to say, I was not that impressed. Most of them were very mediocre. I liked how they were challenging though.

couldn't get this to work :/