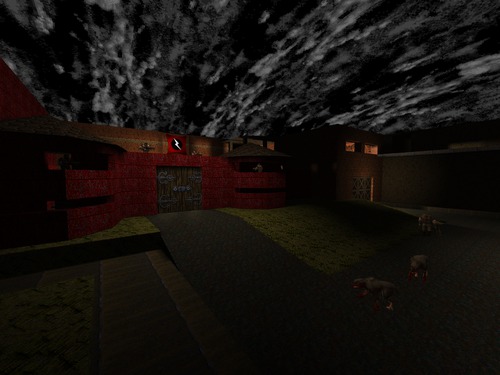 Small level for the NavySeals Mod.

Whereabouts is the secret in this level? I've been searching for ages and it is absolutely beyond me! :(

Despite the "poor" construction, this is a decent level with not so bad gameplay. 2+ for me.

2 Factions on The Quake Grave

It's weird to review a level that was meant for something else, like reviewing 2 Factions in vanilla quake which is a map made for Navy Seals. Regardless, here we are. The map is decent, it's competently put together and plays great. It has around 100 enemies to take out and actually has objectives in it. Not that the objectives are that much different from the normal, find gold key for gold door type of thing, but it does vary.

The map earns points for uniqueness, in having some areas that are a bit different from other maps. Like a torture chamber complete with splattered body above the entrance. Or like the huge sewage system below the bases filled with Rot Fish. Or like the helicopters that you enter and exit the level in. not to mention a good use of custom textures.

I think where the map may falter a bit for some is the enemy placement. There are more than a few closets that open to reveal a handful of enforcers and grunts all coming out at you simultaneously. This didn't bother me too much just because I enjoy shooting a group of enemies at once with the rocket launcher and watching them explode. Others may be put off because the map combines said grunts and enforcers with the medieval monsters of Quake. The other thing is the map doesn't have that professional feel of quality to it. It's a little boxy and has that 90's Quake feel to it, which also doesn't really bother me all that much.

Despite that though, I don't know of too much in this map that I disliked. I would say check it out at least for the custom textures and brushwork done here.

One last thing is I was challenged by a viewer on youtube to try and find the secret in this level. While I found the secret, it was only by clipping through the level and I have no idea how to access it legitimately. Anyone know if there is a way?

This map feels like Quake but it is not fun to play. Poor map design overall.

This map feels like Quake but it is not fun to play. Poor map design overall.

People tend to hate mazes in quake, this level was interconnected and I see why it is getting so much negative reviews.

I liked it, there is a military base feeling to it. Although the monster feels a bit odd. But remember, this was released in the 90's, there was no Quoth mode.

Rated this a 4, to think this was done so long ano really felt like a gem

This is the first Quake custom map I ever loaded up and it seemed ok to me.