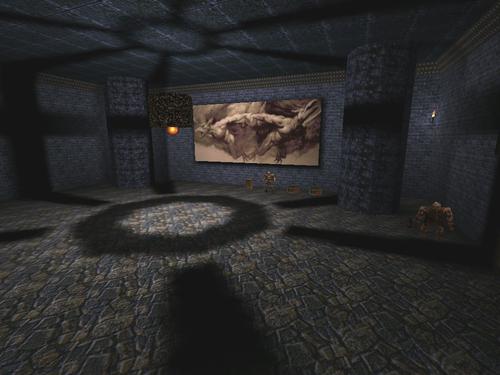 The Ascent from Hell

Looks a little rough in places, but I enjoyed this for its originality, bizarreness and unpredictability. In some respects similar to (though not as good as) wca (https://www.quaddicted.com/reviews/wca.html). Geniac (http://www.geniac.net/quake.htm) describes it as “stupidly difficult”, but I disagree: as long as you play somewhat strategically, it is not unfairly hard.

Played fine in DarkPlaces (latest stable release), but in Quakespasm I hit an invisible barrier when rising out of the coffin at the start.

Despite it's simple design, it has great ideas and atmosphere Combat is neutral

Thanks for the rec Icantthinkofanickname

OKish map with lots of ideas inside, relieance of thinking before acting, and some insta-death not unfair traps. Difficulty varies from easier to around ID maps. Ammo/health is low but enough, also the map provides several opportunities for easy monster infighting for a wider breather for ammo.

Oh, and you can go back to hell. Good uck for reaching it.

The paintings in the first part of the map are really cool, but the gameplay is terrible.

At the start, got stuck in the elevator, making it go down again. Made me laugh because the sound of lights turning on and everything were all the and I missed it.

The combat wasn't pleasing. But I liked the new ideas. The only thing I complain is that with new textures, you never know if its a secret or just a detail.

Once I got through the silver-key door I went through a teleporter ... and it took me back to the start. Nothing seemed to have changed, so I gave up. Does anyone know what I was supposed to do next?

This map has a lot of original ideas and great atmosphere. Especially the dark first room was quite creepy, reminding me of the beginning of Blood. Great use of lighting!

As mentioned by others, combat relies more on thinking and monster infighting, which I don't mind. I thought it was still fun and provided another type of challenge from traditional combat. I did die to one instadeath trap, but it didn't feel too unfair, as stated by Cocerello.

The secrets seem tougher than usual, as I didn't find any. The readme states that rocket jumping is required to find secrets in the map, and with that in mind I'm pretty sure where to look for them. If only I had found the rocket launcher in the first place, though. :D

Also, playing the game with coop mode enabled, as suggested in the readme, adds a cool twist to the map that I haven't experienced elsewhere.

After entering the silver key door, don't go into the teleporter but take the wind tunnel at the ceiling.

The unmarked wind tunnel was what soured me on this map. I spent 5 or 6 mins walking in circles, at a loss for what to do next, before I noticed it. And visually, the areas after the wind tunnel are an abrupt change from the earlier parts of the map and look much cruder--I suppose that's meant to signify that the player has left hell and returned to earth, but IMO it makes the map feel disjointed.

Yes, this was was a bit rough around the edges and I was confused for a while about what I should do. I am giving it a comparatively generous rating because i think anyone who has been around the quake community for long enough (which, let's face it, is all of us by now) should play this to see some of the new ideas it has.

The start was very creative. Those few seconds of wondering "WTF?" before you see you are on an elevator. The use of artwork was cool. Seeing the meta-art of a quake screenshot in quake was interesting. But the coolest, for me, was the door embedded in a painting, which looks tres cool. I also appreciated some of the open spaced we had to do combat in.

Overall, not a map I would hold up as a high example of the art. But something good for a quake-er to experience (and maybe steal some ideas from!?)

average that that i would say is not really worth playing as it is too short and not a lot of combat in the map. I will credit the author for the implementation of the paintings in the map as they provided a feeling of dread while playing the map. Because of the quick ending to the map i would only give this map a three out of rating and say it is not really a must play custom map as their are better maps to play on the archive.