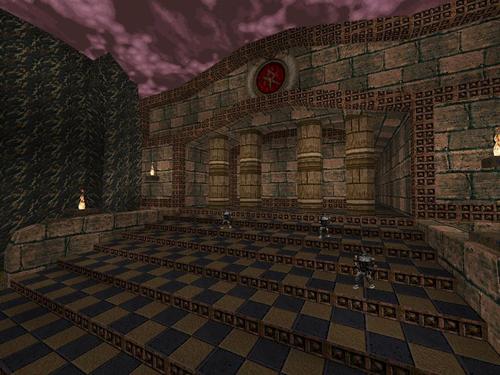 The previously commercial missionpack "Abyss Of Pandemonium" (aka impel) has been bugfixed and improved to be freely released in 2008. 2 single player episodes (11 maps) in decent to nice quality.


Quaker 23 February 2010, 16:30
Maps are decent to nice. Don't play aop1m5 from scratch, you'll run way short on ammo.
hkBattousai 26 May 2012, 22:40
It was super good! That burning grenade gun is my favorite!
Cocerello Registered 10 September 2012, 20:35
A good quantity of average to nice maps, with new monsters, than even though don't blend very well with the theme some times, they do in the gameplay. The new weapons are good too and have their own uses.

Difficulty, ammo, health and armor varies a lot with the levels, but you never lack any ammo/ health if you get the weapons when they come. They all need balancing.

I liked the use of textures and colors, but i do think that the changes are too abrupt and there isn't a continuity in the theme of the maps.
I liked too the first boss, good concept, even though it seems weird that that kind of monster jumps that way.

A tip: the big walkers drop a backpack with lots of rockets and shells, so think when you are confronting them :) , you'll need that backpack.
markdown Guest 7 May 2013, 4:09

is best why the version 1.05, but the quality is a little low.

is best why the version 1.05, but the quality is a little low.

The robots take too much damage and too slow to present any danger so I usually just run past them.

It's really not a bad addon! I wouldn't have paid anything for it back in the days, but as a free download, you get a nice collection of missions which are worth playing.

As stated above, the robots are really a bit annoying, the first boss is a SERIOUS pain in the ass (I mean it... just miss once or twice and you run out of ammo --> GG!) and some of the traps are hard to evade (especially at the beginning), but finishing this doesn't feel like a waste of time at all. Thumbs up!

i got 1 thing to say about this mod. it kicks your ass extremely nightmarishly

I decided to use the original version for my first playthrough. This update seems to go beyond what's to be expected from a bugfix release, and not always in a good way.

Relit maps may seem like a nice idea (extra effort!) until you compare the very first rooms of the two releases:

I was aware of the author's belief that overbright lighting is evil, but I didn't know he thinks the same about deep shadows. Not sure if there are other changes, but this one was already more than enough for me.

I don't know if there was access to sources of everything, but maps receiving changes like that and "extensively patched progs" (once again, the updates are pretty arbitrary, but at least they shouldn't make anything worse) seem to indicate that there was. Still not sure, but if there was, then there are also things that could've been improved, but weren't. Impulse 12 is still absent, and there are some serious cases of Z-fighting in the maps.

Oh, and the skins. The new external skins are just resized and sharpened old skins with compression artifacts. Delete or relocate pak4.pak if you don't like such enhancements, or are playing with nearest neighbor texture filtering (some clients won't require this).

Not too shabby, and it ended quicker than I had hoped. While the maps were fun to go through and everything, apparent laziness regarding poor implementation of overbright lighting leaves them feeling a little more drab, and preventing them from reaching their full aesthetic potential.

The new monsters were a case of hit or miss. The bats are more annoying than even the Scrags, and beefier as well. The electric Enforcers will demand your respect as they prove themselves to be intimidating in close range, and a menace in distanced combat. The big robots are misfits whose overall low threat level is disproportionate to their unusually large HP pools - rockets provide the most efficient way to tackle them considering their drop.

As for the weapons, the Napalm Launcher felt right at home as its secondary effects provide a great alternative to the GL's own dynamic prowess.

The Impaler is a more subtle type of rocket weapon that can demolish lower tier monsters, and can be used to rapidly drain the HP of tougher beasts while you wait in safety until they can OHKO'd. Its recoil can serve a tactical purpose, particularly when 1 on 1 with a Fiend.

As for the two new cell-fueled weapons, the LG-2 felt quite inferior to the original LG, with a rather inefficient ammo/damage ratio. If you miss this weapon when it first appears in the earlier levels (like I did), you'll eventually run into some pretty bad ammo shortages. The AMLS's nature is reminiscent of the Unmaker in D64, serving as the laser weapon that becomes overpowered through upgrades, and is quite fun to use, making up for the LG-2's glaring imperfections.

In the end, this mapset is still paralleled and exceeded by SoA and DoE, for it lacks the proper polish and refinement that made those two feel so cohesive and professional. Regardless, the level design and extra assets make for a fresh enough experience that it's worth going through at least once.

Greetings, Where is the soundtrack please?

It's great to have a whole mission pack for free, and eleven levels are not to be sniffed at. And yet ... I can't get excited about this one. I replayed Armagon recently, and found it distinctly underwhelming by modern standards, but this is well below Armagon's level. The new monsters -- including both bosses -- are pretty awful. The layouts are incoherent and artificial. Most of the new weapons are close to useless (though the fire grenades are kind of fun). There's a new power-up but it doesn't seem to do anything.

New monsters and weapons are both pretty poor. Difficulty is all over the place and some of the traps are just BS. Maybe I missed something, but there were multiple times I got myself stuck somewhere and I had no choice but to noclip out. Texture work in more 'natural' environs tends to be fairly ugly.

Rather interesting set of levels. Not quite at the level of SoA and DoE, but worth my time. 4/5

Dude... Fucking jesus!!! Where the HELL is the soundtrack... This shit is GAR-BAGE!

A wholly skippable mappack. This is Q!Zone (imaginary counterfeit Baltic states FTP edition) quality stuff. Even for a "2.0 reimagining" the levels were unsalvageable. The map designs had me recall levels from a 90s 3D animal platformer, transferred to Quake. I'm sure many corners were cut and deliberate limitations set in place for the original (examples being the low detail, large - for the 90s - outdoor areas, etc.) due to the fact no one expected people to ever play this in high resolutions. Go play Malice if you want to play an old Quake commercial add-on, that one is worth playing, this is not. If Malice isn't your thing then give the freely available mappacks on this website Beyond Belief, Nehahra, and Travail a go, but this? Avoid.

I was compelled to retry this after somebody on Reddit was claiming it should be considered Quake's 3rd official mission pack, and I was relieved to see this bug-fixed release from 2008 as my first memories of the pack were not good.

Played it, was somewhat hyped by the premise of "mission pack #3"... Well, for me another mod (Travail) did the job of an expansion pack much better. Can't say much about maps and weapons, they were... ok, i guess. Monsters, on the other hand, were very poorly designed and looked amateurish. Especially the fast black knights, bats and first boss. However, Jaggers - the robots - while overpowered, were actually kinda fun. Final boss - Legond - looked like a custom model for DM, imported into game... I expected the lieutenant of Quake to look somewhat like Almalexia from TES III: Tribunal, not like a female combatant from Unreal Tournament))) Even though I said all that about new monsters, I still gave this mod 4/5, because it's OK. Not great, but still does its job of providing more Quake.