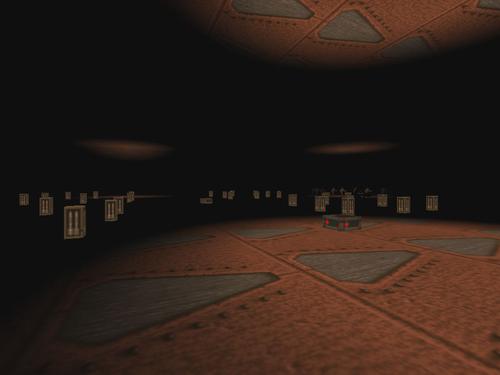 Large leaked room with monsters and many rockets. Can only be played in a high-limit engine due to excessive lightmaps. Map source is included.

Grab the plentyful ammo and kill the 40 monsters. That's it. There doesn't appear to be an exit.

I spotted the following flaws: no attempt at texture alignment, Shambler(s) stuck in the ceiling, and a large leak in one corner of the map. The author was kind enough to include the prt file in the zip, so you can easilly find the leak if you can't spot it yourself. Too bad s/he wasn't kind enough to fix it.

Blasting hordes of monsters is kind of fun for the 120 seconds you'll spend playing this map, but there isn't any other reason to recommend it. I, personally, rate this as the second-worst map I found in the archive (LoCaLH being the worst).

Reminds me a lot of the map Kill 'em All, which is quite a bit similar, but a shred of more effort was put into making it.

For starters, Kill 'em All is fully sealed, has more weapons, a quad and most importantly, it is fully lit, which has a huge impact on gameplay. Having a fully lit map allows the player to survey the map and devise some tactics on how to best tacle the map before unleashing the full fury of his or her arsenal.

Arenaq, however, is mostly dark, which makes it just a map about shooting blindly in the dark with the rocket launcher. It does make it play a little bit differently from Kill 'em all, but I wouldn't say in a good way. Of the maps I've encountered thus far, I agree with ubiquitous on the rating of this map.

Reminds me a lot of the map Kill 'em All, which is quite a bit similar, but a shred of more effort was put into making it. ... Kill 'em All [...] is fully lit ... Arenaq, however, is mostly dark, which makes it just a map about shooting blindly in the dark

Kill 'em all (not to be confused with this charming little release) is actually not lit at all, so in that respect, a shred less effort was put into it.

When a map has no light entities, Quake defaults to fullbright lighting (i.e. completely uniform, bright lighting throughout the map). You can confirm this in-game by using the console command "r_fullbright 1", which overrides the lighting of whatever map you're playing and shows everything as completely fullbright. Use "r_fullbright 0" to switch back to the map's original lighting. In a map like Kill 'em all, you'll see there's absolutely no difference.

But you may be right about the effects on playability. Lighting in Quake can be really tricky for mappers to get right: just placing a couple of light entities in the map and not adjusting their default values will in most instances result in a poorly lit level with many completely dark areas (cf. many beginner maps especially from the 90s). It takes a fair bit of practice to light maps properly, so once a new mapper has figured out how to make more than just an unlit, fullbright box (like Kill 'em all), the next step is usually a poorly lit, overly dark affair like this one.

Being overly dark can make a map unplayable, whereas a fullbright map will just be really ugly -- hence situations like these, where slightly more effort can paradoxically result in a worse experience for the player.

Esrael, I just realised you have a released map to your name, so I probably over-explained things. Didn't mean to insult your intelligence!

Oh well, hopefully someone will find the comment informative.

Icantthinkofanickname, no worries. ;) I actually found it informative. I mean, I had probably learned about maps being completely fullbright until light entities were added, but I certainly didn't remember it at the time of reading your comment.

When I wrote my previous comment on Kill 'em All being lit, I did think to myself that the map was probably fullbright since the lighting was so uniform. Not remembering the fact you had just mentioned, I was just assuming the author had gone through the effort of applying fullbright during light compiling. But no, instead he had gone through no effort. xD

Just wanted to add that yeah, a lot of the stuff you wrote was pretty obvious to me as a mapper. :) You didn't know that at the time of writing, though, and your comment was still written in a polite way, so I probably wouldn't have found it insulting. I still appreciate you going through the extra effort of writing your follow-up comment, so all's well! :)

For what it's worth, i found it interesting.

crap , no exit found in this map and bad texture alignments everywhere. I agree with ubiquitous as this is the second worst quake map on the Quaddicted archive. This map gets a one out of five rating from me.

It felt like a map that you do when you're testing the engine. Like a secret in a map that I can't remember, filled with monsters, quad, invul and said "you know what to do"