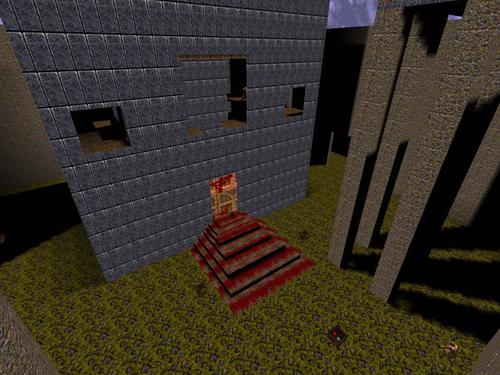 "A Huge Level made to sort of resemble a castle" with the author's own editor (actually a bunch of simple brush editors).

I had an incredibly hard time finding my way to the end of this map. Seems overly complicated navigation wise for a map that call itself Basic Castle. Maybe that was the joke!? =) You can watch me play it here: Basic Castle on The Quake Grave

Started off as good, simple fun. Quickly degenerated into a random wander in search of ... what, exactly? It's impossible to tell what you're meant to find, or how. Very frustrating. I rarely give up on a level once I've started it, but I did with this one.

Oh, meant to say -- the reason I played this is because it's the oldest map in the whole Quaddicted archive.

The oldest quake map on Quaddicted, eh? Well, for the first of the first, it's not too bad. It has some decent combat in it. So why did I rate it two? Because I couldn't figure out what the frarf I was supposed to do! I couldn't find how to finish the map, and I think twenty minutes was enough playtime from me on this one. I actually think that if you have enough people, it might be really, really fun for deathmatch because of all the weird hidden passages. I actually quite like some of the item placement too. I wouldn't recommend you play this on its own though.

..not bad ! A squared castle (but well enough built) with an open area surrounding. definitely my cup of tea..ehm Quake !

Very old and ugly map with horrible lighting. I could not find an exit but I killed most of the enemies. There's honestly some pretty alright combat in there but the map itself is so frustratingly confusing that it's just not worth it. A better name would be "Confusing Castle" as I just can't figure out what to do and, judging from the previous comments as well as ArrrCee's video, nobody else could either. I give it 1/5, highly un-recommended.

As I know some will just have to try the oldest level in the archive, and I had some luck with playing through it, I will explain something critical to beating it. Unfortunately, you will soon find that it is much worse than getting lost.

To reach the end of the level, the door at the bottom of the central building needs to be opened. There are several switches that have to be pressed; one is by jumping through the lava on the floor above that door. The rest are all accessed in sequence from the following location. The platform to the left of the entrance holds a teleporter on the right beam with a zombie in front of it. The teleporter needs to be entered from behind by jumping from the left beam (I actually did this when I first played). This will take the player to a room with blood on the walls, where the quicksave and quickload keys will get plenty of use. Multiple rooms each have a button that needs to be pressed to proceed, with another button leading to a death trap and another dropping the player by the entrance.

Clearly better than those maps rated below it on Quaddicted. This map, at the very least, has a serious attempt to construct a geometric likeness of a castle. It also has plenty of stuff to kill and a kind of puzzle to reach the exit (yea, it has an exit!)

But it has some serious shortcomings. Most importantly, key gameplay elements are not signposted. There are teleporters with no teleporter texture, so you can only find them by sound. There are buttons without button textures, so you only find them by accidentally standing on them. There is lava that you have to jump in. A door that blocks the exit says simply "Pain and sacrifice are the keys", which could be the start of a cool puzzle if it weren't quite so cryptic.

I came close to giving this map 2/5 because I had quite a lot of fun at first. But I ended up being confused by the above issues and having to noclip my way to the exit.

Ignore this comment: I am testing whether Quaddicted's implementation of Markdown needs an backslash to escape a following underscore when within backquotes.

I had actually found the trial and error sequence of rooms, mentioned by Dymitry earlier, on my own, but it turned out that the last of the rooms, where you have to choose between three teleporters, the teleporter you're supposed to take wouldn't work properly on my playthrough, taking me back to the very same room with the three teleporters.

I even tried the map on both Quakespasm and the original Quake over DosBox, but the same behaviour occurred in both platforms. I wonder if the map would work on GLQuake or WinQuake, or something. Anyway, because of the map being broken like this and points brought up by previous commenters, I give the map 1/5.

Two big awards for this map:

-Being the first map ever uploaded to the archive. -Being one of the worst maps ever made for Quake.

It's simply that. This map really looks like "my first map for learning muh map mechanics". Horrible use of lightning, terrible use of textures. Absurd geometry. Everything is bad on this map, even the difficulty and the way to beat it is just insanely hard.

Two big awards for this map:

-Being the first map ever uploaded to the archive. -Being one of the worst maps ever made for Quake.

It's simply that. This map really looks like "my first map for learning muh map mechanics". Horrible use of lightning, terrible use of textures. Absurd geometry. Everything is bad on this map, even the difficulty and the way to beat it is just insanely hard.

For a map made when Quake was released barely a month before it, and the limitations of tech back then, it's pretty impressive in what it managed.. or tried to do.

Other than that, it's rubbish. Textures are a severe eyesore. The symmetry and homogeneity of the map combined with the cryptic teleporter/switch puzzles makes for a very confusing and unpleasant time. The age of this map is no excuse for such questionable design choices.

The quad-damage deathtrap was awkward enough to where I ended up noclipping out of since I had assumed the area just glitched up, before I realized later on that it was supposed to kill me.

For the effort it took to make a map back then and how it turned out to be more than just a few crude cubic rooms on a flat plane, it almost deserves 2 stars. But for the lack of cohesion and desperate guesswork required to beat it, it's a 1.4, rounded to 1 star.

You CAN complete this level without cheats. The three portals part is tricky but works. You must open the portal on your right and close the others 2. Now calculate approx 10 seconds, and before it closes enter that portal like crazy, and eventually youll get to a different room. Now you are one step closer to the end, get to the platform at your left and carefully press the button on the wall (there is a teleporting outside portal nearby.) Now the sequence is complete!. Take the circle elevator that will take you outside. Now enter the middle room of the castle, and the door will now be OPENED!. Now you can defeat the boss and you are done.

For one of the earliest maps(if not the first user created Quake map?) with the name "Basic Castle", its more like "Super Confusing castle with LOTS of teleporters and switches". This map took me over an hour with multiply saves and 2 deaths with trial and error on my end trying to find the exit. Despite bad map design and poor texture attainment, its quite impressive that the author made this with his OWN brush editor that he program himself.

Well... Its the first map ever uploaded to quaddicted, its not terrible, but is really bad and chunky

Intersting idea, HORRIBLE execution. But this was very very early in Quake's life, so I guess it's ok.

What a time capsule even in the Quake Mapping Community!

Years ago I tried several times to find a solution. Now I finally have it without No Clip and as in the 2 video I found, it was simply cut away. You just have to shoot yourself free after you get into the room, because you are hanging in the wall. In my opinion this is a mistake.

This map is worth playing for it's historical novelty but man, is the progression ever obtuse... I think the best way to get some value from the map is to play it but don't fret about finishing - when you get stuck for what feels like too long then just noclip around and exit.

Progression is in fact super weird but props to the guy for trying something, even without any really good mapping tools.

The readme might actually be my favorite part BTW. Nothing specifically weird about it, it's just such a 1996 readme!