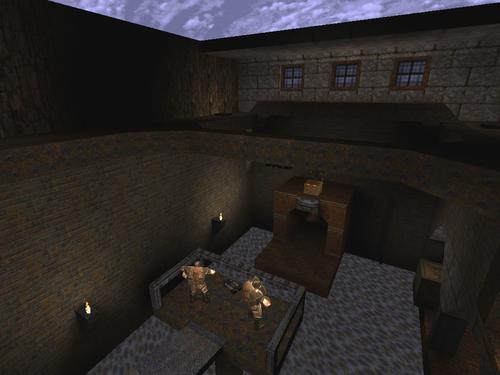 Medium to large Medieval map with a few other textures mixed in, and confusing progression. Barely average.

I really like this. Lots of puzzle/discovery elements and complex with a lot of charme. I might have used too many "advanced" movement tricks (strafe jump, wall turning) but it did not make it worse. Highly recommended!

Can you please explain what strafe-jumping and wall-turning are? Thanks!

The map looks visually quite good for the time. The brushwork and texturing are quite detailed and the map is interesting to explore. The combat is enjoyably challenging, and seems to encourage utilizing monster infighting, considering the somewhat limited supplies.

However, in terms of progression, it is a very confusing map, as stated in the description. The map has the player move to and fro and backtrack considerable distances, especially if you accidentally fall off the ledge for any reason.

The basic formula of the map seems to be throwing the player in a room, clear the enemies there and then find a hidden trigger to progress to the next area. At times I didn't know where to go and got stuck trying to find the required trigger, which felt like secret-hunting, because they were quite well hidden.

Speaking of secrets, there were a lot of places that felt like secrets but were not. I ended up finding only 1 out of the 4 official secrets.

To add to the confusion, sometimes the map had some misleading visual clues, like this one barrier post that normally would signify to a player that you can't go through it yet, when in fact, you were actually supposed to try to figure out a way how to just jump over it all along.

I also came across this one very cheap instadeath trap, that can be quite hard to notice. There I was, just minding my business, killing ogres and fiends, when I suddenly found myself dead on the floor. For a moment I was just dumbfounded, not knowing what had killed me. It was so out of the blue.

Overall, I didn't get stuck or confused long enough for it to severely detract from enjoying the other well executed elements of the map.

Looks nice enough, but I got hopelessly stuck, and I can't open the .dz walkthrough file.

Welp, I was finally able to open the demo, but it seems broken. The player goes outside the map right at the beginning and floats aimlessly in the vacuum for the whole demo. :(