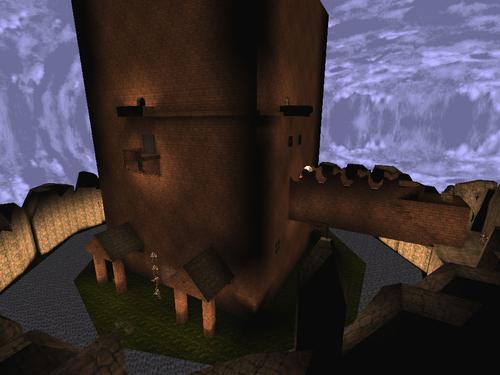 Mini-episode - a large brick building spanning across several maps which the player travels up and down trough. Mostly plain brick/mixed texture style with a somewhat maze-like and confusing layout. Barely average.


Repus 21 March 2009, 10:40
I am surprised to see poor rating for my creation after such a good review at Ten Four. I spent nearly a year making this (this was my first level). Well, people have different opinions.
Cocerello Registered 13 September 2012, 20:30
Well, the map isn't bad, but here its rated compared to the rest of them, and, its only highlights are the layout and the originality, the rest (architecture, gameplay, theme, ambient, ...) are poor to average. The idea is good, but it needs more work.
KommissarReb (SW12) Guest 3 March 2015, 12:27

Can't figure out how to beat this level. I also found a leak in the map where you can go into the rock wall and fall outside.

some really cool and creative ideas in this one.

A lot of creativity indeed, but also a lot of mistakes. The brushwork is poor even for the time, and the texture usage is often strange or wrong (e.g. using door textures on walls). Gameplay is mostly ok but there are some mistakes in that department too. The first map is a bit confusing at times, for example I didn't figure out what "bars" were lifted without noclipping around, since they are accessible only via a somewhat hidden lift, and the nailgun would be easy to miss I think. The buttons in the prison cells of the 3rd map can all be pressed multiple times, so you don't have to find them all (I exploited that to avoid the vore, to be honest).

There's more I could go into, but I won't.

That said, there are enough cool ideas here that make up for the bad aspects and lack of polish. I especially liked the boat at the end of the set, though there are drawbacks even there (the sides of the boat are just high enough that you can't use the LG without hopping out, for example). I genuinely hope that Repus, who is back and commenting on maps, finds the time and inspiration to make new maps.

Well, Repus is a different man right now. I am not a student at Seneca College any more. So, there's really no time for making new Quake levels, though I'd really love to ,`@)

Very nice map, interesting concept and great challenging parts. But there were some glitch problems, like at the begning when I passed throught the rocks that delimit the stage and got lost in that limbo sky not being able to come back without cheat. At the maze part when that wind would blow me away and stop me from proceeding, I honestly don't know how I managed to pass throught that. But the most relevant bug (that's how I consider) was at the spike ceiling part when I just couldn't pass because of those goddamn stairs just blocking the passage. I had to noclip them. If it wasn't a glitch, so please someone tell me how to overcome that part. But overall, well elaborated map, very creative, full of exciting challenges and the text messages were very fun and the secrets very well thought. Congrats bro and keep making maps.