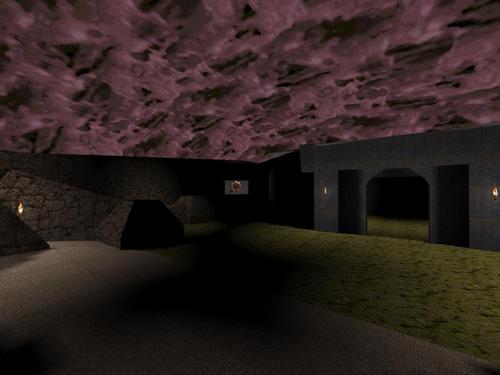 A rather plain map. Starting outdoors in a metal theme, it goes into an zombie-infested underwater castle, and finishes in a lava/brick environment.

i don't think i've ever payed a quake map so insanely hard (skill 1) in all my life. i godmoded after the fiend room (which i survived somehow). the map was very dark. also, i got mad at the maze. i apologize for my negative comments. however, i do respect that Sid & his nephew made this together. that's pretty cool!

Please I need to know if author Sid is the same Sid Davis of skeet.bsp and dumbdim.bsp ?

Straightforward combats, even though they are harder than ID maps, they are doable, and they aren't unfair ones most of the time, the player just have to save from time to time. The difficulty comes mainly from lack of room to move, choice of monsters, and some shambler ambushes. The fiend room can be survived if the player remember their weakness when jumping.

There is some traps here and there, but they are guessable. There are no insta-death traps. The maze is a real pain, as it is barely lit. Playing it in fullbright, as i had to, made the maze an easy one to guide myself.

If it had some decent brushwork, architecture, and decently lit maze it would deserve a 3, but as it is and for the year, 2/2+

Clearly, this map isn't small, as the tags imply, i would say it has medium to large size.