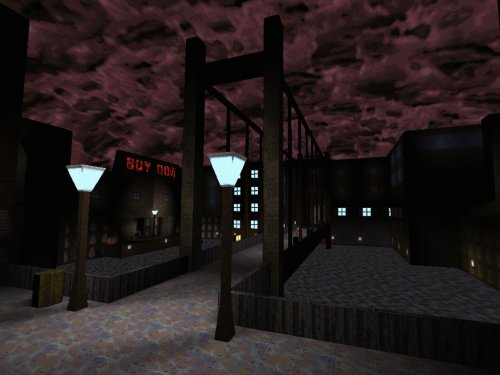 A mini-episode consisting of three small urban realism-style maps, with some emphasis on exploration.

User Rating: 3/5 with 14 ratings
You can NOT add ratings if you are not logged in.
Icantthinkofanickname★ Registered, rated this a 3 1 December 2014, 0:57

Quake does not lend itself particularity well to Duke Nukem 3D-style modern realism, but this mini-episode pulls it off extremely well, in my opinion. It looks a bit rough at first glance, but there is a lot of attention to detail, and ultimately the author succeeds in creating an immersive modern urban setting.

Gameplay is interesting and well designed (well, partly; more on this below) and consist of more than standard running and gunning. The second map is notably trickier than the first, and requires a fair bit of exploration. The third would perhaps not be that interesting on its own, but with the mood having already been set by the first two maps, it feels suitably ominous.

There is some unique visual language here too, with certain buttons changing into arrows when activated. It is a mechanic I have never seen before in a Quake map, but it is clever and immediately clear.

The only real issue with this episode is its stinginess with ammunition (at least on skill 1). By the end of the second map I had to cheat myself a shotgun shell (yes, just one) as I was completely out of ammo and it was impossible to continue otherwise.

Some players may also be put off by the somewhat primitive visuals -- especially compared to recent releases by superstar mappers, but even for the year it was produced. I was surprised to see that the files are all have 2010 timestamps, as I expected the maps to be from 1998 or thereabouts.

Overall, a nice and unusual episode, albeit arguably somewhat rough around the edges. Probably not everyone's cup of tea, as it deviates quite a bit from the standard Quake formula. It is reminiscent of Neil Manke's releases, both in terms of gameplay design and the realism of the setting. Recommended.

Hmm, I should have said "well" or even "reasonably well" instead of "extremely well" above and should perhaps have been a bit more cautious about recommending this, but unfortunately we cannot edit our comments on Quaddicted...

Apparently this mapper has a thing for urban realism: a quick internet search reveals that Perro Seco went on to gain some renown in the Doom community with a map that recreates New York City.

<it deviates quite a bit from the standard Quake formula.> Why that should be seen as negative ?! Actually I guess is a good thing :)

I was pleasantly surprised by how well this worked, once I'd got over the visual crudity. it's cramped and ugly, but it provides a sequence of interesting challenges, and the difficulty is very well balanced (on hard). Seems like it should be older than 2010, but never mind. It's a shame that this seems to be the author's only release. It would have been interesting to see what he might have come up with given time.

I want to give this three and a half; ah, the coarse granularity of the Quaddicted scoring system! Oh well, I'll be generous and give four stars.

my favorite part was actually the 'credits' screen, with the stars & the planet, if you will. i noclipped to check it out, and it is very cleverly created.