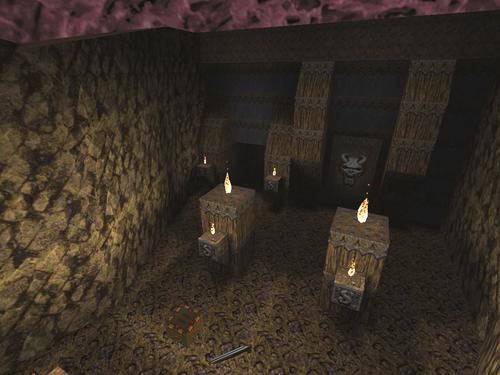 The map is good as for design and areas. Only one secret though. Initial fights are routine as well as horde enemies are multiple mouse clicks. The armor usage is unreasonable. They would better give us BA at the beggining (the main hall), yellow armor at blue key area (secret) and red armor right before the final fight door. Because the button trap passage cannot be visited once again to use conserved health armor and ammunition, the last trap is intense and ussually is not surpassed from the fist try on skill 3. I rated it 4 because i like challange but hate bad items placement, small amount of sectets and confined areas.

Don't wanna be harsh, T there are different types of difficulties. One of them is to throw hordes of monsters with different types of attacks in front of the player, with a lot of room to move like unforgiven shown us. And there is the trap difficulty, with less monsters since you have to deal with the enviroment as well.

This map tried to combine both, not with hordes of monster in tight areas, but with unfair monsters teleporting in unfair places in a small area.

Teleporting scrags that surrounds and locks you in an elevator with ogres firing rockets at you. And the finale was horrible. The button trap was cool, fell for it. But after it was horrible.

A moving bridge that disappears, two fiends teleporting in each side followed by shamblers? If you play this on nightmare I think it will impossible, since the AI will make at least one be firing like crazy.

And no armor before the fight? And just to add up, and I think the author was conscious about that: "secret.."

I managed to get through it, but I didn't really enjoy it. I ended up jumping back into the 2nd to the last room, after triggering the fiends and before the bridge completely submerged, and tactically taking out a good chunk of the baddies. I'd love to see an uninterrupted playthrough of this map, because I bet most folks get through via save scumming.

The map itself is laid out pretty nice; however, the gameplay is not my cup of tea.