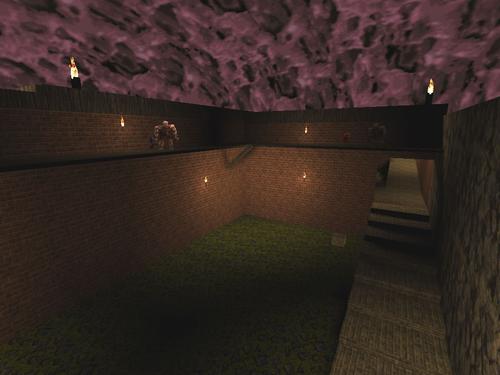 City Of The Undead

Medium sized red brick map with a few outside areas. Playable but boring visuals.
This file was repackaged by Spirit. You can find the original .zip in the trash

Plain, but fun, probably because you have a lot of room to move around.

Blocky and plain, but the combat is pretty fun and the layout is decent with a few non-linear flourishes.

While the map looks horribly dull, at least the themes are consistent with id, mostly being terracotta but having a little bit of wizard at the end.

JMP got the gameplay aspect well described, so I won't add much to it, but I did notice that the map starts a bit slow forcing the player to use the single barrel shotgun for maybe a bit unnecessarily long, and then you get three new weapons all in the same room. Maybe a bit more trickling would've been in order.

There's also an abundance of yellow armor in the map. I would've replaced them with green armor, since there's plenty of space to dodge enemies around, and combining that with pretty high-tier armor makes things too easy. I did come across an unofficial secret, where I would retain the yellow armor, though.

Speaking of easy, the final arena was a bit of a let-down. Lots of space and the boss probably isn't whom you'd expect to see.

When all's said and done, the map's still pretty fun to play, and I'd probably rate it 2,5 if I could.

As a sidenote, the map has the rare inclusion of ogre marksmen, since I saw one infighting a regular ogre.