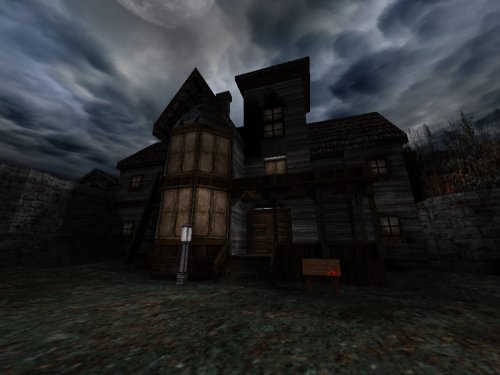 Cradle to the Grave

Remake of Blood's e1m1. Requires Darkplaces or another engine with support for transparent textures.

3/5 with 23 ratings
You can NOT add ratings
if you are not logged in.

Visually this map is very pleasing and is a pretty good representation of Blood. The scale needs to be increased by about 50% for the gameplay to work. Also I ran out of ammo a number of times and I felt like there was a lack of health, grunts are powerful in large numbers and will quickly make short work of the player. This is exactly what happened.

I will be really interested in seeing Ruin's next map.

Pretty much exactly what FifthElephant said.

To that I would add that the first few rooms before you get outside (catacombs, I guess?) are really nicely built. Once you enter the house, though, the scale really becomes a problem, and things start looking a lot more blocky (possibly in part because of the scale issue).

I found it to be a little buggy, too. There was one point where I fell out of the map. The transparent textures tend to flicker in and out of transparency (which might be an engine issue). It's also possible to grab the first gold key without opening the crypt; it should probably have been placed a little deeper.

The ammo/weapon/monster balance issues FifthElephant mentions meant that I finally gave up and godmoded my way through the map. I found one secret nailgun; other than that you just get the super shotgun, which seems a little stingy for a single map (as opposed to part of an episode).

In short, an impressive first map visually (barring the somewhat blocky interior and some less-than ideal texture work here and there), but one that would have benefited from a lot more beta testing.

And of course I am also hoping to see more from Ruin!

It's a nice remake, looks fresh with the new textures and all. Interiors are pretty cramped - the downside of realism style in Quake.

There's a whole bunch of items falling out due to improper placement. This also happens in newer version of Darkplaces as the corresponding sv_gameplayfixes to take care of such things are now disabled by default. Ruin, make sure to test your maps in developer mode (type "developer 1" in the console before loading the map and watch out for warning messages)!

I'm afraid this didn't do much for me: it felt cramped, overlit and arbitrary. But it's always great to see a new mapper, and I'm keen to find out what Ruin can do when he spreads his wings and creates something completely new.

BTW., I got two our of four secrets, but one of them didn't seem to get me anything. In the area just before the second gold-key door (why not make it a silver key, BTW?) there is a teleport sound, and a panel with a shadow different from the others. When I hit that panel, it opened, but I couldn't get inside -- the gap was too small. Is there a reward for that secret?

Is this your first map? It's a bit rough in a few places. For a few examples, the window behind the player when he walks through the first gold key door (which opens up to a knight) has a crack in it which lets the player fall out of the map. If you jump on the gravestones (the nailgun secret) you can also go the opposite way on the wall and skip most of the level. Two of the secrets give you nothing for finding them and one even trapped me. There's also nowhere near enough supplies, and the whole thing feels cramped. It's certainly not BAD, but it definitely needs work.

"If you jump on the gravestones (the nailgun secret) you can also go the opposite way on the wall and skip most of the level. "

This had to be intentional; the original level lets one take that shortcut as well, although it is more difficult there because one has to jump from a voxel gravestone onto an extremely narrow fence perpendicular to the window and break it open, all with the wonderfully accurate looking up and down provided by the build engine. On another note, the original level was also very low on ammo at the beginning and involved a lot of melee fighting. Aside from that, however, it is not the most accurate remake possible and really adds nothing to the original either.

Nowhere near enough health or ammo. Played pretty much the entire map in godmode.

Architecture is too small-scale and fiddly to move around in properly. Real-world locations like the interior of realistic buildings are pretty boring, to be honest, in a game like Quake. Far far better to build blockouts of interesting gameplay layouts, and then add the "realistic bits" as a layer of detail on top - e.g. Sock's "town" style maps like Zendar - the layout is totally gameplay-driven, but layered on top of that is a medieval town aesthetic that makes it all very convincing, even though you'd never have a town in real life with the layout of Zendar, for example. I hope that makes sense!

The first part of the map (before you get to the mansion thing) shows plenty of promise.

Just come back to this. I really feel like I want to give this map more points, maybe because I genuinely love Blood. It's one of my all-time favourite games, as is Quake. But the scale, the lack of ammo, and the fact that grunts can make really short work of the player with their shotguns... it's frustrating to really want to love a map and yet you can't because of the downfalls!

I hope Ruin takes the comments on-board and puts out the excellent maps that he is definitely capable of making!

Did not really work for me. I never played Blood, so players who have may enjoy this more than I did. The change of scenery was refreshing but perhaps a bit crude, subtler lighting would probably have produced better results. And ammo is too tight on Nightmare, so even at the beginning, I wound up running away from Knights until I could find some grunts to limit my loss in ammunition.

I also felt the map was a bit cramped at times (also I've seen worse in more recent releases). Like others wrote, it may have to do with the spirit of the original game. Some parts reminded me of Doom II or DN3D, not because anything looked like it of course, but because of the way the level forces you to move and look around.