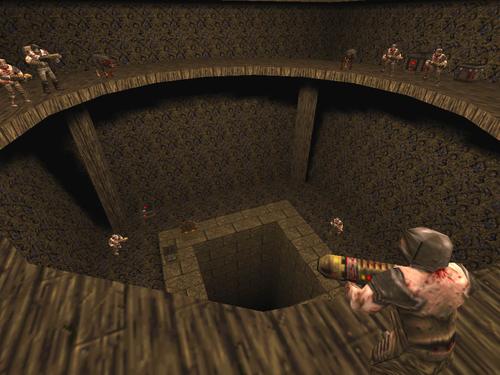 Small Wizard map with a large water area at the end.

There are hints of neat moments and details in this map which, if they had been built around, could have made for something kinda interesting by early 1997 standards. Unfortunately they remain fleeting details and a lot of the map is various unitextured boxes with monsters in them. In any case, it's not intolerably terrible, just nothing interesting. Plus it gave me an excuse to mess around with E1M8 again.

The map sure has that charming 90s beginner map look and feel to it. It's kind of all over the place, though, with a bunch of seemingly random ideas that weren't quite fully realized, as stated by itsme above. Maybe they're supposed to tell the story that's mentioned in the readme, but I couldn't quite connect the dots.

Also, depending on which path you decide to choose at the beginning, you could either end up running out of ammo or becoming overpowered early on.

I'd still say the map's worthy of a playthrough. Its quirks and randomness make it an interesting enough map to experience.

This is a poorly constructed map with very little ammunition to combat the enemies within this map. I would give this map a one out of five rating and would not recommend playing this map as their are other maps on the archive worth your time.