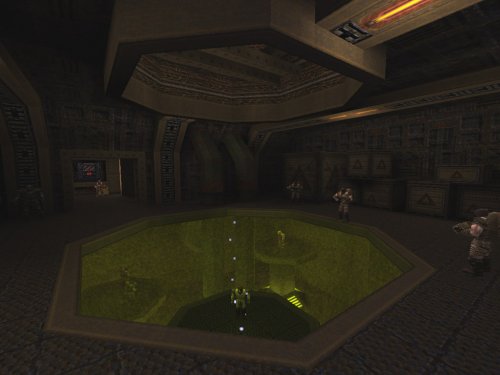 Very large, nonlinear base map with a unique twist: progression requires rocket jumping and the way to proceed is hidden, which essentially makes this a trick jump puzzle map (with respawning items) that can easily leave the player lost and confused.

Note: This map requires an engine port with increased limits. This is an updated version with bugfixes/tweaks.

Sorry, but this ending vore is bullshit, how can someone think thats fun? Style is okayish for the rest of the map, but this ruins it totally.

The first version I could not finish without using noclip. This was much better, the chevron hints helped me find my way around the map. Finally realised how to kill the vore with the crushing mechanism but it was ridiculously hard, for me anyway. I had to load/save countless times before I managed it more by accident than skill. It reminded me a bit of "The House of Chthon" which I also found very hard many years ago but would now find easy! Anyway enjoyed the second version but not the first - did my head in not knowing what to do or where to go.

I managed to kill the vore without dying or loading a game. Respawning items helped greatly, because it's not entirely safe to run around trying to figure out what to do while being chased by a flock of explosive chestnuts.

I've tried playing this several times and I just can't get into it... I hate rocket jumping though. At least I prefer it in quakeworld and quake 2 and 3... I can never get it right in normal quake.

This was a cool map.

I suck at rocket jumps too, but as a big fan of Digs's work (and experimental maps in general), I had to try this ...

… and found it frustrating to play, mainly because (as Shambler notes in the map's release thread at Func_Msgboard) there is too little visual differentiation between different areas. This makes it hard to distinguish between places you have already visited and those you still have to get to -- which is very unfortunate, since progression here mainly centres on finding one's way to initially inaccessible areas. So if you do not know what place you are trying to reach, what should be puzzle-solving soon turns into haphazard running around – and that was what playing this map felt like to me, most of the time.

Other things that bothered me include the lack of a secret counter and the many inviting ledges that contain no rewards. I share Daz's feelings on the slime pipe. The boss was simply painful.

However, despite the fact that I did not enjoy the map much, I would still recommend at least trying it -- simply because of how relentlessly it pushes the envelope.

All of this and more has already been said by people far more knowledgeable than me, in the above-mentioned release thread (link added to the left), which I would highly recommend reading.

Yeah, last boss was a bitch, you have to do two rocket jumps while you can't really avoid at least one of his projectiles (the lowering switches do not give enough protection). That means that with 100/150 at start I was 12/14 or so after that.

I think that the ledges with switches in the end should have more room to hide from boss' projectiles.

Another thing is that I didn't think that I should get into the green waterfall to swim up to the last rune, had to noclip to find that out.

But it's a good map overall, solid 40 minutes of fun.

Well, I can only agree with most of what's been said above. I love the uncompromising experimentation of this map -- incredible that after eighteen years of Quake, we have mappers who are not just finding better ways to do things, but new things to do. Also I loved rocketing the room full of hundred zombies :-)

But there are two main drawbacks that prevent this from being the five-star map it should be.

First, as Icantthinkofanickname noted, the very similar visual style throughout makes it very hard to keep track of where you are. Throw in an over-reliance on teleporters, and you have a recipe for confusion. I don't think I've ever known a map where I spent so much time thinking "Wait, have I been down this passage before?"

Second, the are two places that are just too hard, and where I cheated without shame. The very ending is one, of course, as many people here have noted. Just not fun at all. The other is the tall circular room where you have to do a sequence of four or five difficult jumps one after the other. The problem is that if you don't rush (and I never rush, I like to soak up the atmosphere), your pentagram runs out leaving you with not enough health to complete the last two jumps. So I just went into fly mode for the last one.

Otherwise, it is really good, verging on great, with some really good puzzles and a lot of fun exploration. I think some redecoration and a rethink of those two very hard areas would make this not just a 5* map but one of the all-time greats.

I've tried to get into this a handful of times, and I always give up. I can't fathom where's the fun of rocket jumping, it's pointless except for cheating your way to a secret or skipping a portion of a map (which is also cheating), but making a whole level entirely based on it seems ludicrous. Hard to believe this was made by the same author of The Anomaly 2 and The Isolation.

This is a pretty impressive map from Digs. It actually has a lot more progression tricks up its sleeve besides rocket jumping, including a timed button/door puzzle and some interesting uses of liquid brushes similar to digs06. I have to agree with some of the criticisms above, especially about the vore boss--as in ritualsp, it seems better in concept than in action--and I admit I had to noclip twice to get my bearings. Even so, I very much like this map. It's too bad single-player Quake maps designed to facilitate rocket jumping are such a rare breed.

nice map. the boss is major bullshit tho

I think the boss fight is actually quice fun to figure out as long as you don't pretend to finish the level without saving. However, I have to rate the level just a 2 because I found the rest of it to be a rather confusing and maze-like grind.