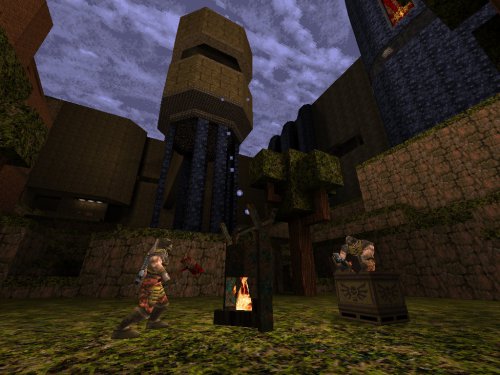 Large fortress with four differently-colored/textured areas around a Minecraft-styled courtyard.

lol so ugly in places. good combat make it good.

Excellent! But too much teleports I think :)

Really enjoyable map with lots of creativity. You'll begin to lose your mind in this isolated complex. Digs continues to keep the surprises going all the way to the very end!

It's not often one has to mark a review of a Quake map with spoiler tags when discussing anything beyond secrets, but before you read any further, I highly recommend you download and play the map yourself. It's worth it.

This is a great map. Digs has gone the "experimental" route in the past, and while this map may be a bit restrained in a sense compared to their previous offerings, it may be the best one. Not only does it make creative use of space and Quake's core progression mechanics, it also features a very cool implied story done in a way I haven't seen before in another Quake map (let me know if anyone else has done something similar!). You're trapped in large, intricate complex with strange progression but are constantly offered views of large, seemingly inaccessible outdoor areas, populated with Quakeguys camped out and completely unresponsive. Presumably they were, like you, people who found themselves trapped in the fortress, but upon escaping found themselves just as trapped as before. It's a little sad really, and imbues the whole map with an atmosphere that couldn't really be achieved otherwise. It may not be as "pretty," generally speaking, as other modern Quake maps (certainly got ugly!), but it has a good hunk of something else going on that I really, really like. While pPlaying it I was reminding of some comments that Liz Ryerson made on her youtube channel, in her Doom Mixtape video on one of the A.L.T. maps (a WAD I highly recommend if you like Doom): essentially that long-running modding communities offer creative people an outlet to produce strange new things that are difficult to find in an industry that is often far too obsessed with the high-tech, nostalgia, and $$$. This map is a a very good example of that.

P.S. I only found on secret and completely by accident!

And might I add, this map is much better than my many typos!

Very confusing -- all those teleporters! It feels more like a deathmatch arena than an SP map.

Still working on it, but I am not at all clean on where I am, or where I am trying to get to.

I'm calling it. I have 161 of 218 kills, and I am now wandering deserted halls desperately trying to find the next thing to do. I have pressed two of four pillars and two of four buttons, but have no idea where the others might be. I am just wandering in circles. Such a shame. Time to move on, unless someone can explain an underlying theme that I am missing.

Thanks for the tip. If I replay this at some point, I'll bear it in mind. At this stage, though, may attempts to solve this have been superseded by enough other levels that I won't be able to find my way around at all :-)

Well, I replayed this. I have all 218 kills and 7 of the 10 secrets. I have reached what certainly looks like the end -- the air-vent that wafts you up through the central outdoor area to the floating teleporter -- only to find that it drops me back into the map for a final encounter with three shamblers and a vore. With those dispatched ... now what? No further new areas seem to have opened up. How do I actually exit?

I found a way out: rocket-jumping past the door that say "broken" when you try to open it. But surely that's not the official way to do it? I've never seen a map that required a rocket jump to finish it, except ... come to think of it, Digs's previous map, digs07, RJ Zone. Hmm.

Mike, rocket jumping is not required for this map, but I haven't played it since it first came out and thus can't be of much help. I do remember being almost as lost as you at at least one one point (not enough to give up) but I came in expecting a labyrinth. Maybe I'll play it again over the weekend (if I get the time to play a large map in between attending a film screening, a poetry reading, and work on Saturday, heh) and see how it goes.

To be clear, I only needed the rocket-jump at the very last point in the whole map. Otherwise the progression, while complex and confusing, was ultimately conventional.

Another good digs map. This one felt pretty contrived though.

A bit heavy on teleports for my taste, but a good map nonetheless.

Completed on skill 3 all secrets found, but i thought i was in startrek with the ammount of teleporters, very confusing so only a 3\5 because of teleporters.