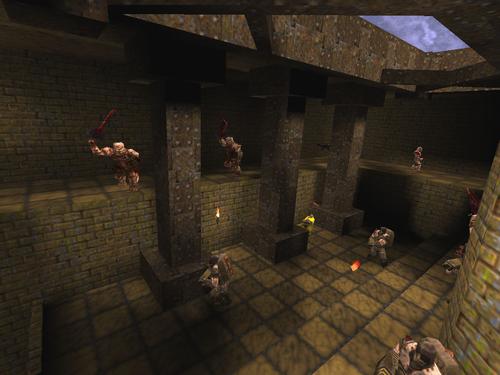 Some maps are quite difficult, especially on skill 3. I bet a lot of weed was smoked when making this pack.

Place of Two Deaths (dm1sp) was a very frantic opening, but perhaps needed a bit more care in the transition to single-player. I found that after surviving ammo starvation (I had to run past an ogre to get more shotgun shells) I ended up with way more than I could use. And it's frustrating that getting the DBS is the very last thing that happens! Finally, the lack of an exit teleporter is such an avoidable disappointment.

I can't get anywhere at all with Claustrophobopolis (dm2sp): I start locked in a tiny area, and can't find a way to open it. There's a teleporter in there, but it doesn't work.

The Abandoned Base (dm3sp) is much better: a real challenge early on, and some tricky moments later. I found myself down in single figures for health at one point, which is often a sign of good gameplay balance. Crucially, this one has an exit, so there was a satisfying sense of closure. Less satisfactory: there were three or four silver-key doors, but only one key -- so I never got to see what was behind them all.

The Bad Place (dm4sp) is enjoyable, but anoyher level where, once you survive the initial onslaught, the rest is terribly easy andf anticlimactic.

The Cistern (dm5sp) is altogether too easy given that you come here from earlier levels where you've stocked up on weapons, ammo and armour. Perhaps it would be more fun to play starting with just the shotgun and 25 shells.

The Dark Place (dm6sp) could have been an interesting reimagining of the deathmatch arena as a Chthon lair. But it fails because Chthon can't really hit you when you're up next to the Kill Chthon button; and because there is no exit (or if there is, I never found it, despite the arena being small).

All in all, it was fun to play these maps, revisiting places that used to be very familiar, but they feel like a missed goal. The single-player conversions are incomplete, with not enough thought given to progression, balance, and even (sometimes) basics like providing an exit. It feels like a just a little more work could have made these maps much more enjoyable.

@MikeTaylor I could get out of dm2's start area with a well placed grenade, they made that button shootable :)

Thanks, I'll go back and try that some time!

I just saw it on Quake done Quick: the last map has an exit. It's hidden in the lava and requires the Gold Key to get through.