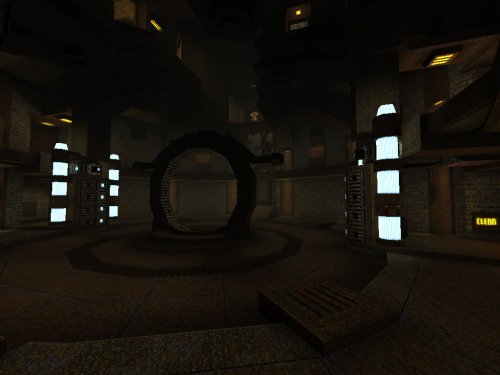 Another amazing than map. I cannot get enough of it!

This is my first time posting a review on quaddicted and I am happy to say it is a positive one! I've never reviewed anything before so hopefully I can structure this into something coherent.

I also did a skill 2 run of the map if you can tolerate potato quality: https://youtu.be/miYPzelM21g

To start off I like how the map introduces you the mechanic of powering up areas with batteries in the first area of the map, so I instantly knew what I was supposed to be doing when I reached the powered down slipgate in the center of the map. Kudos to the author for explaining that little mechanic so quickly.

The map seemed to break down into roughly three different phases. The initial battery/key hunt, which had a nice sense of choice and non linearity in it. Then the arena fight that triggers when you first power up the slipgate. The C'thon fight was a nasty surprise turned out very doable. I normally hate when mappers use C'thon (Never finished Contract Revoked because fuck that insane knockback+thin walkways suspended over lava) but it was kept very short and sweet. The red armor given to the player before the fight was essential to the fight working and I was able to deal with those nuclear radius lava rocks without trial and error. I appreciated how he dies on the first lightning strike instead of three, it would have been a slog otherwise. The last phase at the bottom at map was just the cherry on top. It was a little anti-climatic compared to scripted sequence that came just before it, but still was a fitting conclusion to the map.

I also must say the visuals on the map are pretty solid. The set pieces and detail in geometry was nicely done, I felt like I was playing a AD map with all the vents, steel girders, chains and pipes around making the map feel like a genuine place instead of an abstract maze. The non-base monsters felt a little out of place visually, but are totally fine based on how much they add to the map gameplay wise.

Overall the map is a solid 5 out of 5. It's just consistent high quality throughout and I look forward to checking out the author's other maps.

P.S. Also the story section in the readme was hilarious. Remember kids if you want to be a badass slipgate warrior just smoke a pack of Marlboros a day ;).

Well, first of all, as always, sorry for my rusted and brazilian english. Played on level hard, hate nightmare.

My first run on this map was a delight. Like mentioned above, I really like how the author can communicate the purpose and details of the map in a natural way. The objective to be searching for batteries was clear from the beggining to end.

I found 5 of the 8 secrets (and the easter egg at the end). At first I thought, "blooded grates now?" because if it was a powerup, I think no one would have found it before the final fight.

I liked the branching paths to power up the portal, feels like several maps compiled into one.

Here are some of my complaints (maybe it was purposely done):

Maybe because in the original quake the easy path was to the left, I always go left path first. In this map, it caused me to goa long way with a simple shotgun. Maybe put a super shotgun in both ways, and leave weapons like the super nailgun on one and the thunder on the other, like in a 1000cuts? (I didn't find the thunder, but I think it's a secret).

Another issue is that when portal charges up, and maybe I haven't read it in the heat of the battle, I didn't realize that the emergency rooms were opened. So I was "axing" and making the monsters fight each other a lot. After the fight, I was all packed for carnage again.

And last, and this is my personal issue (i know). I hate when there is a door that is obsviously a door, that when you touch says nothing. Because I think it's a secret and keep searching. After you pick up the battery in the right pathway, I was sure that it was a door in the orange pipe. I had to noclip and find the drop to the rocket launcher.

But I rate this a 5 nonetheless. It was perfect.

Two highlights for me:

In the battery room of the left, there was a shambler. When I was in the middle of the fight, I heard a fiend noise. I really panicked for two seconds thinking it was on my back. Nice coincidence.

And in the right path, when you are going to the air pipe to go back, you fight the shambler and in the corner of the screen I could see the fiend approaching. That was nearly cinematic for me.

Really a piece of art. Thanks.

Best map I played in ages. than, you are a master at Quake style and gameplay.

The only thing that stinks about this map is that now I am torn between which is my favorite Than map ... this one or Occupied Base! Great map. Download this sucker.

I just played it for the first time. It's now in the list of my most favorite maps

This is what Quake was made for. Perfect map.

Moody map from the very beginning, just the way I feel it should be. There is heavy focus put on a central place, around which all the action orbits tightly, giving much sense of place and purpose. There are some puzzles, there is great deal of verticality to the spatial design, done proper way, for benefit. The "Dark Portal" itself, at the very first glance, does strike as a haunting construct, building the bulk of atmosphere.

Goals are clear enough to be understood intuitively and reached without becoming perplexed on the way, albeit not dead obvious. There are three major paths: the path of the golden key, the path of the silver key and then, the path of the "ignition", further leading upwards and downwards. The environmental clues, are readable.

There is noteworthy elegance in spatial design, already mentioned. Clever recurring use of most introduced spaces - in a cross-section manner - weaving pathways without the labyrinth effect being imposed at the player; owing to the timing aspect, implemented well.

In terms of difficulty level balance and intelligence in combat design, this is a superb map. The difficulty level, is simply just right - speaking of skill level "2" - oscillating around menacing but ultimately not very hard, if to apply a reasonable skill to resolve the situations - it is enjoyable game.

Hilarious background story in the "readme" file, but to promote smoking, is a no-no!

A little too light in colouration and feel for me, maybe I'm getting spoilt. The map is made of two main sections where one has to collect power cells for a central section, and I found the running around in narrow corridors being penned in by waves of mobs quite frustrating. The ending was well done but it was a bit too relentless for me. Maybe this map was quite something a few years ago, but its excellent has since been superseded.