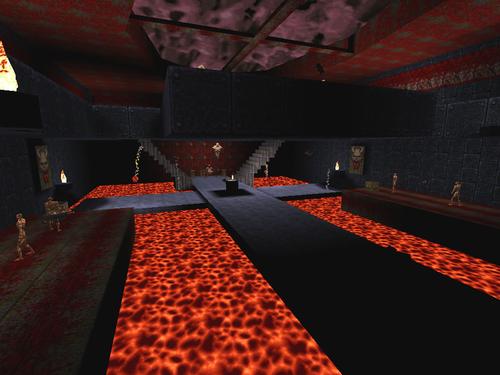 1.7/5 with 9 ratings
You can NOT add ratings
if you are not logged in.

An obvious deathmatch map with tacked on monsters for singleplayer. I'm okay with "singleplayerification" when it's done well, but this isn't the case. Sure, there are a lot of enemies, but the player is supplied with all the powerful dm equipment of the map to make killing the monsters trivial.

What is not trivial, however, is figuring out the level exit, which is behind a mandatory secret. It's really not that hard to figure out where it is, but depending on the situation, it could be impossible for the player to reach it.

In terms of architecture, the map doesn't look too bad, when judging against other beginner maps from the era. The starting room feels kind of disjointed from the rest of the map, though, like it doesn't quite belong to the map.

I wouldn't recommend playing this map in single player. Try deathmatch instead.

too short of a map, and i agree with the above poster that you are to overpowered to handle the enemy encounters that are provided within the level. More recommended for deathmatch than single player. I would give this map a two out of five rating just because it is a well designed map because of its brush work.