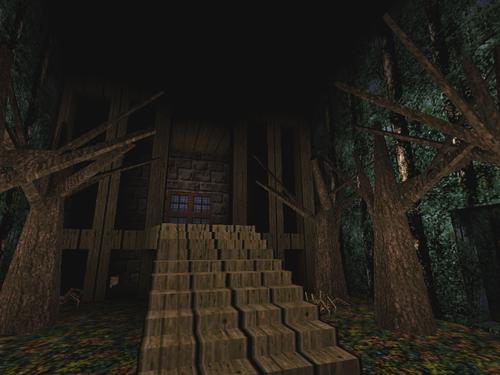 2/5 with 11 ratings
You can NOT add ratings
if you are not logged in.

While it was interesting to experience the new monsters and weapons and the map looked decent, it didn't play that well otherwise. You're just thrown a bunch of random weapons against a bunch of random enemies. It feels so messy.

Some of the changes to the weapons were weird, like changing the sounds of the axe were completely uncalled for. And there was this one laser enemy that seems to do way too much damage per shot.

All in all, a weird map that I'd check out maybe once out of curiosity to experiment with the new weapons and monsters if you never did back in the day.

The amount of "oh god what the fuck" I've experienced in the two minutes spent within this level was approximately 3. I don't know what I was thinking, since 2 is usually enough to make me run for my sanity.

I think my ears are still ringing from the new and improved shotgun sound.

"what the fuck?" The level

"what the fuck?" The level

What a truly bizarre collection of content. It's quite obviously put together as a "look at all this cool mod stuff I like!" showcase, which means you'll be encountering quite a bit of strange stuff that never quite matches up in style with base Quake nor with each other, and which vary wildly in quality.

On the one hand, the custom monsters do include the marvelous Wily the Spider, whose gorgeously detailed model & texture feels perfectly in tune with the official enemies (if only he had custom sounds instead of just using the Vore's voice!), as does his inventive poison attack & tiny, hard-to-shoot hitbox; other decent enemies include the Snakeman (who's goofy-looking and has pretty flat colors, but is fun to fight and seems to have inspired the Centroid), the Blarg (who has a very nice model that feels right at home next to the Fiend, Vore and Shambler, but its behavior is basically just a Fiend with shorter jumps) and the Cyberdemon (an obviously-amateur recreation of the Doom monster, but it's hard to screw him up). On the other end of the scale is just about everyone else: individual Grunts appear with baffling new textures that make them look like James Bond or the Hulk; some custom Grunts are granted massively-overpowered laser weapons and the ugliest texture I've ever seen; and most laughably of all, the "Femenforcers", Enforcers reskinned to be buck-naked ladies complete with bare nipples and ginger pubes, who make unsettlingly loud screams when they die. Rounding things out are the gloriously bland Raptors, who look decent when standing still but walk like wooden wind-up toys and have the attack power of a mosquito, and a Dragon who was blatantly not designed for a level like this, because it clips through literally every single wall, on top of just freezing in place midair when it dies.

Just as weird are the collection of textures and models that make up the level, which are mostly valiant efforts put together in horribly clashing composition. The inside of the Lodge actually does look somewhat like a real house, complete with simple but believable furniture, decorative art pieces, and appropriately homey floor & wall textures, plus a few haphazard but valiant attempts at repurposing vanilla elements- the Fiend head hanging above the fireplace like a trophy is charming, and repurposing the Death Knight and Shambler models as statues is clever (even though I definitely expected them to come to life, which they never do). This is all contrasted with the terrible forest outside of the house, which is just a collection of nasty green walls that are clearly not actually outdoors, with just a giant shadow on the ceiling to stand in for an actual skybox.

As a level, this thing does not come together in the slightest, and I gave it a low rating as a result, but it's interesting as a sort of time capsule of the Quake modding community as it existed at the time. Most of the era's popular custom monsters are crammed into the mod for your viewing pleasure, plenty of (useless) custom weapons are at your disposal, and loading the file even defaults your controls to what I imagine was Wheeler's personal setup, which includes hitting CTRL to shoot and using the arrow keys for movement, which i couldn't bear to even attempt using.