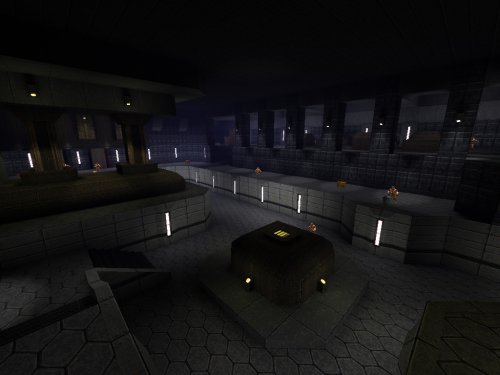 The Dreaded Dreadbase of Dread

Medium sized, easy, base map. The map has a well done Doom feeling.

Somehow makes Freedoom textures look not entirely atrocious. Who knew that destroying them with another palette conversion was the way to go. Or maybe it's taking them out of the original context of a shoggoth Doom imitation and into a different world, also devoid of atrocious sounds and questionable sprites.

Another debut, and a really good one. I know base maps are not everyone's cup of tea, but I really enjoy blasting my way through this kind of setting, and I thought the gloom worked well in this one. Well judged ascending difficulty of enemies, too, though I felt the whole thing could have done with maybe 50% more monsters. A very promising start!

A well built debut map. Even if it's mostly lowly base monsters, they were well placed: The grunts were scattered all over the place, allowing them to ambush/overwhelm/take potshots at the player and whittle down his or her health, especially on nightmare difficulty.

Thankfully, there were a good amount of health packs and ammo to balance out the punishment the enemies try to dish out.

The brushwork and texturing were good, considering the material you were working with. Maybe it was partially the rather bland Freedoom base textures, but every arena kind of felt the same: grunts and enforcers spread out over the place with the occasional ogre and scrag.

Perhaps it was the bland textures again, but it was really difficult to differentiate the secret doors. In my first playthrough I was only able to find the Quad damage secret. Thankfully the map doesn't rely on the player finding the secrets at all, meaning the secrets only provide just a little bit something extra to help out the player in the main path (well, besides one secret). And I think that's the right philosophy for secret design. Also, the bland aesthetics don't apply for the secrets, which look awesome! Seriously, I think just the looks alone of the secrets make them worth the difficult hunt.

As stated above, an extremely competent map, but the similar arenas with similar bland Freedoom looks do degrade the experience, unfortunately. The good-looking secrets and well thought out enemy and item placement, however, give the map a feel of polish that deserves a high rating.

This Dread Base on The Quake Grave

This is just a variation from my comment on func, but overall great job on this!

I really like the custom textures and there are some fun fights in this one too.

My only real critique is with room size and enemy agro. In a few rooms in this one, you'll walk in and trigger the whole room to come after you. Normally this isn't an issue but when the room is that big, it always makes for an odd fight. Nice work overall though!

Cool visuals, orderly and tight design (maybe too tight with the exception of secret areas). Enemy placement seems to me a little dull.