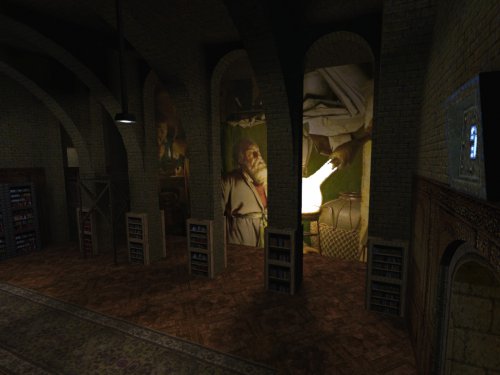 Three-map mini episode in a dark medieval theme. It has an extra start map and features a few modifications, some new sounds, models and textures.

Note: These maps require a source port with increased limits and BSP2 support.
An updated version is available here.

Not bad. Visually interesting in parts, especially the iconic paintings on walls. You don't see that very often. I like the Honey look to the second map that gives it a bit of scale and atmosphere. Quite a few areas are far too dark as well.

As far as gameplay goes, it's a bit predictable and janky. Spawning enemies was never something I liked, and in the first map I cheesed one encounter by just standing behind some boxes while the AI failed to get to me.

An opportunity was missed to add more secrets to these maps, there are hardly any at all. I saw plenty of areas where there could've been something to keep the pace going, but it felt a bit empty. Add more secrets!

Until Quaddicted is updated, there is a new version of the map with a couple of big fixes available here: http://www.quaketastic.com/files/singleplayer/maps/e1ubiplantegenetsv13.zip

I like this release very much, but please to fix the save ability on second and third map.

The link for 1.3 that ubiquitous shared above is borked, due to Markdown interpreting the underscores. Here's a shot at a correct URL:

Ack. I'm having the same problem cosmaty reported, where the engine crashes if I try to save the game on the 2nd map. The same problem I always have with Danzadan's maps.

@ cosmaty, Solomoriah: which engine are you using? I saw a number of people play successfully with QS.

@ ubiquitous: I use QuakeSpasm 0.93.0 for Linux. This is not issue only for your map, but some new maps have this one. I read somewhere the problem could be because of memory and solve by proper map compilation, but I have no skills for find a real reason. Anyway, congratulation for great epizod :)

Ubiquitous, just FYI, I've posted some suggestions about fixing the crash-on-save bug in your thread on func_msgboard.

New Version Okay, using the suggestion of iw, I have produced a new version (1.4) that should hopefully fix the save bug. It can be obtained from Quaketastic here: http://www.quaketastic.com/files/single_player/maps/e1ubi_plantegenets_v1_4.zip

@ ubiquitous: Thank you for fixing the save issue. Now I could finish your episode that was great in every part of level design and gameplay. I am looking for your next work soon. I hope you keep going.

Very fun set of maps. The paintings were a great touch.

Yes, the save bug is fixed for me too, and I'm loving it!

Overall decent episode, but it is very clear that the maps are in order of creation. All of the maps have nice visuals, but the first 2 suffer badly from awkward geometry, pitch-blackness, and repetitive gameplay. They feel very 90s (in a bad way). The third map is a big step up, a 4/5 on its own. It's fun to navigate, the gameplay is exciting, and there's some cool custom models put to good use (including a custom key). It's still a bit too dark though. The author must have a brighter monitor than I or play with a higher gamma, because there are several moments where something important simply can't be seen on default brightness.

I enjoyed this a lot, but without picking up any sense at all that it had anything to do with the Plantegenets. The artworks are lovely, though, and really add something.

@cosmaty @Solomoriah I too have suffered with the crash-on-save bug on many maps — not just the ones in this pack. I very recently upgraded from QuakeSpasm 0.93.0 to 0.93.2, and that seems to have fixed the problem. Hope it does the same for you!

@MikeTaylor: the reference to the Plantagenets is there, but is a bit subtle and requires some knowledge of literature as well as history...

@ubiquitous Are you going to spell it out? :-)

Very nice, atmospheric and visually unique. I particularly liked the murals and the "misty lightings". Gameplay is tough at times but always reasonable.

@MikeTaylor the map titles "Seat of Mars", "Under Eastcheap", and "Into the Breach" are references to Shakespeare Plays (Richard II, Henry IV, and Henry V respectively). Those are three Plantagenet kings.

Copying my comments from func here.

OK, I've only played the first map so far, but I wanted to comment on it while it's fresh in my head.

I really enjoyed it. Yeah that particular brick juxtaposition mentioned above is a little off :-) but largely it's a good-looking and interesting environment.

It gave me an odd but nice feeling of a very old-school and new-school map at the same time. Old-school because of some of the narrow doors and hallways (and generally more Quakeguy-sized scale to places and objects), thin supports/rails here and there, and some plain square tunnels. New-school because of the cool bits of surreal "field of squares" brushwork. And:

The use of textures showing some old-master paintings was an interesting choice. It sounds like you have something thematic up your sleeve w.r.t. those, but I just liked the way they both fit into the atmosphere and also "popped", even if they didn't make much sense as diagetic pictures in the environment. Choosing paintings that are strongly about the use of light brought some interesting lighting effects into those rooms -- psychologically anyway, since I don't think you actually added any light entities to reflect what was going on in the paintings.

Anyway, it's fun to run through a quality creation that was driven by a slightly off-the-Quake-mainstream vision. As I mentioned above, the detailing was uneven, but some rooms were pretty nice and I expect you'll find a consistent level. FWIW I don't mind the narrow hallways when used appropriately -- and I think that e.g. zombie-grenading in narrow hallways is fine and good -- but narrow doorways I am less keen on.

Finished map 2. Fun use of scale! It felt like a pretty epic journey/escape.

I'm glad you had patched out the extra falling damage. :-)

A couple of critiques:

1) I don't mind and can even enjoy some first-person platforming, but I think it's a faux pas (particularly in Quake) to require the player to land in a fiddly way, i.e. to have a small target zone that can be overshot with really bad consequences. The fun in Quake-style platforming IMO is figuring out a route and then in executing the take-off in the right direction, but controlling the length of the jump super-precisely can be more frustrating.

(Having gaps to fall into as you get off a lift is also pretty bad.)

2) A small thing, but: I think you should make more use of "rotted" health packs. When I'm getting chip damage as I go along it can almost feel unsatisfying to only have full health packs available to use.

Third one completed. I'm not going to type a lot this time, but yeah more good work... you've got a real talent for presenting the feel of a journey through a gigantic but knowable space. A little bit of backtracking (with new monster spawn breadcrumbs), a little bit of paths crossing over each other, it almost all works really well and I feel that Quakeguy's fitbit is setting new personal bests for his step-counts.

@JohnnyLaw thanks for taking the time to type up your thoughts!

This pack has a strong otherworldy quality to it. The first map is a bit uneven in the brushwork but sets the tone well. The follow-ups gradually get better both in construction and in gameplay. Combat is a bit on the relaxed side due to sparse enemy placement and an abundance of ammo. Still, an enjoyable romp that will take around an hour if you take your time.

This small episode has an incredibly strong theme to it, from the interestingly lit paintings, to the crumbling details, and shafts of dusty light. The finale was also a neat take on an old encounter.

It's certainly a little more cramp than levels tend to be nowadays, but isn't entirely out of line with the scale of base Quake. The only obvious "flaw" I noticed was that the architecture felt rather "thin" throughout. Many of the walls and floors seemed as though they should have been thicker to really push the feeling of not only support in the face of realistic weight, but also the simple sense of imposing visual mass for theme.

I also wish that there had been MANY more secrets to be found. The maps all have numerous nooks and crannies that would have benefited greatly from a tad more exploration in this regard. :)