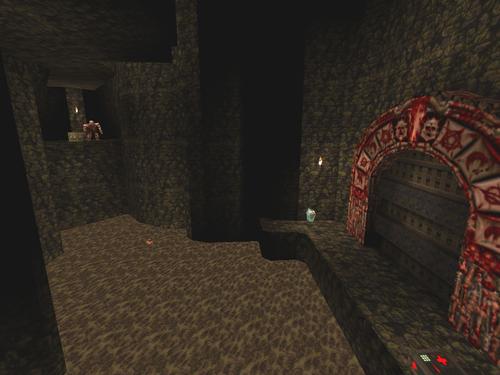 Lost Entrance of the Dismal Oubliette

"This was the original starting point of the Dismal Oubliette, e2m6. It was cut for size reasons since it made the .BSP file go way over our self-imposed 1.4mb limit." - "Winding, dripping cave entrance"
Map source is included.


Qmaster 23 December 2010, 17:25
This was awesome since e2m6 was and is my favorite original Quake map.
Spanky 10 March 2012, 14:46
I could have done with seeing more textures than just ROCK4_1, but I guess this got the chop before a second texture pass was done. Oh well, at least if anything this map explains why there's a visblocker at the start of e2m6.
NightFright Registered 9 March 2014, 8:42

MH merged this with the original E2M6 map a while ago already. You can download it here (even with LIT file for colored lighting): http://www.mediafire.com/download/b6oocqconu70zxv/e2m6-full.zip - I am rating this as a part of the merged release, and as such, it is fantastic. The ending of E2M5 finally makes a lot more sense since it ends in a cave which is logically continued here. It's maybe about 2-3 minutes of additional gameplay compared to what you know from the original map already, but once you have played it, you won't want go back to the version that was released back in 1996. Thanks a lot to John Romero for making this available, and thanks to the Quake comm for using this material to recreate E2M6 John wanted it to be played!

I know that this "map" was supposed to be a part of e2m6 but this map is impossible with shotgun start.

The ending of E2M5 finally makes a lot more sense since it ends in a cave which is logically continued here.

I don't get it. Even the pre-release version of E2M5 ends in a blue room, not in a cave.

Just letting you guys know that this map is now officially part of Quake, appearing in Bethesda's 2021 Quake remaster -- fully integrated into E2M6!

I can confirm what ericvids said and it was a nice surprise seeing it in an official release :)

"I know that this "map" was supposed to be a part of e2m6 but this map is impossible with shotgun start."

I just finished it with shotgun start. The secret with the quad damage at the start helps a lot.

Where do I install the files?