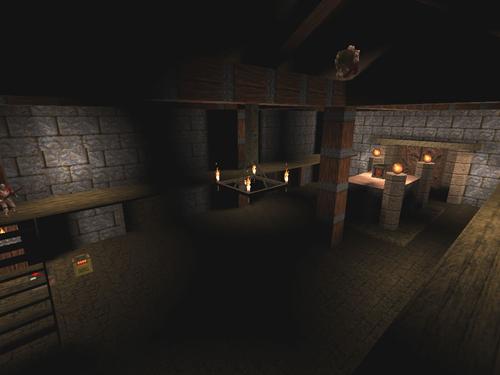 2.3/5 with 9 ratings
You can NOT add ratings
if you are not logged in.

Too dark and crampy at times.

Quite an atypical level that was interesting to experience. The overall scale of the rooms/brushes was smaller than usual, which made it easier to get stuck in geometry and a bit harder to dodge enemy attacks; not in a way that would really annoy me, but just something that I noticed.

Lighting is implemented in a nice atmospheric way. There are quite a few fully dark areas, but not really in places that would make the level feel hard to navigate.

I'd say the most defining feature of the map would be the multiple different ways/paths the map provides the player with to make progress. At first it kind of made the map feel more sprawling and larger than it really is, but still not overwhelming.

Combat is pretty standard burger joint material; nothing to write home about but still something you shove down your throat without hesitation. (Hmm, perhaps my metaphor made it sound worse than what I meant.) xD Ammo is a bit scarce at times, but just plentiful enough that the player doesn't need to resort to the axe.

Come to think of it, it feels like the map manages to bend the "traditional mapping laws" just the right amount without breaking them: It's small in scale, but not quite too cramped; it's dark at places, but not distractingly so; ammo is scarce, but just plentiful enough, and finally it's sprawling/non-linear, but without feeling too mazey or confusing.

However, the map DOES have some "objective" flaws, like an unrendered brush face underwater, unmarked secrets and a final fight you can skip really easily, but they are rather minor.

Overall, a quirky unorthodox map worth playing through in my opinion. I guess I'd rate it something between 2,5/5 and 3/5.

Note: this map will start you off in a Dutch angle perspective if you play it in Quakespasm Spiked. I thought this was an interesting gimmick that the author intended, but it's not (it's normal in other source ports, like Quakespasm, vkQuake, or Mark V).

As you could imagine, the map is buggy as hell, but it has a few moments. The brief description under the heading pretty much says it all. Some spawnings were a bit cheap, but that's typical with a lot of old maps.