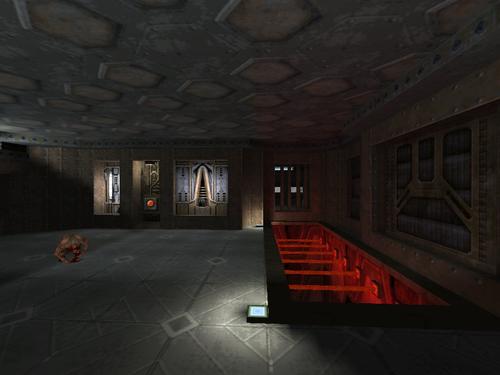 Big base map in Daikatana textures with objective-based gameplay.

that was fun! found the quad AFTER i killed the cyberdemons. shame on me!

Is there any way to turn off the super-annoying lasers at the start of the 3rd floor?

I didn't find a way, I just tried to run through with the least possible damage. Not much fun.

The rest of the map was better, though, with some enjoyable borderline-horde combats and of course the crazy finale. Still, doesn't feel like an advance over Castle of the Dark Ages and if anything is a regression to the level of Cheyenne Mountain Complex. Those Daikatana textures don't help: they're very crude compared with what the best quake maps use.

Overall it is a nicely constructed map, with plenty variation of intense combat in a good layout.

Good brushwork and coherent with the textures, which are a good addition, while being cartoony, which makes the map lose the mood. Linear with nice side areas and backtracking layout. Many unforgiving situations. Nicely used traps. Way harder than ID maps, at least in skill 3, mainly due to placement of enemies that are used to their strenghts and to the darkness that hides them in some combats. It is the map were i had to use the weapons to their strenghts the most to progress, which is nice, as i am tired of seeing the weapons being used in maps as just an increase in damage. The final room, even though is simple, is impressive.

I don't understand how everyone else felt compelled to rate this so highly. Perhaps it is the strong start and middle to the level, with its complicated layout that manages to surround you with enemies at a moment's notice, providing intense and hectic fights that are probably the highlight of the map. Perhaps it is the visuals; they're a good use of the provided texture set, and the brushwork helps to bring that out very well.

But honestly, to me, this map destroyed and ruined all of that with its awful finale. For as much fun as I had with the difficult-but-fair combat beforehand, fighting three "cyberboogies" totally sucked all of the enjoyment out of my experience. They're total bullet sponges, with an attack that's easy to dodge if you're paying attention, but punishes you significantly if you slip up. I think it's telling that the author felt the need to include so much ammo in this area; you're going to be wasting a lot of time with this part of the map.

I ended up giving here; I just couldn't be bothered loading and loading and loading after at least half a dozen deaths trying to kill even one of the damn things. I proved the point of how poorly they are designed to myself by using godmode and giving myself full ammo for all my weapons, using all of my LG and NG ammo and then some to dispatch just one of the three.

It's such a shame that what was otherwise a good map had to be brought so low by a terrible ending. Its earlier quality is why i'm not rating this lower, but I just can't forgive such poor design choices. Even fighting the enemies one by one, in stages, would have been a little more tolerable.

MikeTaylor: there's a switch right next to the second flight of laser-flanked stairs.

Cool map, made me want to watch the movie again. The ending is apocalyptic and I felt like Pritchard at first, especially when I had two Cyberdemons left to kill and only an axe. But there's a helpful Quad in the same room, which I unfortunately found too late, and which probably makes life a lot easier if you grab it when they all appear. I managed to make it out even after getting it way too late.