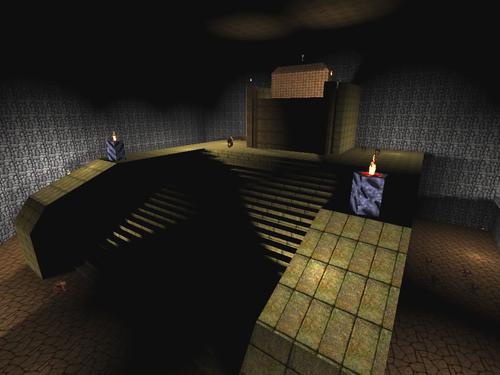 2.6/5 with 8 ratings
You can NOT add ratings
if you are not logged in.

Urgh, not very good 1997 map. Very hard beginning and frustrating rest. Not for me but not too bad.

The beginning is hard due to very tight ammo, so it's better to axe the grunts and don't miss any backpack. Overall, lower in difficulty than ID maps, mainly due to not setting the enemies view angle on the editor and plenty of room to move in a 2D layout. Repetitive combats in a changing theme.

Very average level with plain architecture design and no coherent theme throughout the map. Plus i found the only secret while playing thought the level however it does not trigger that it is discovered. Would only give it a two out of five rating and would say it is only worth a download if you are interested in playing though under developed quake maps from 1997.