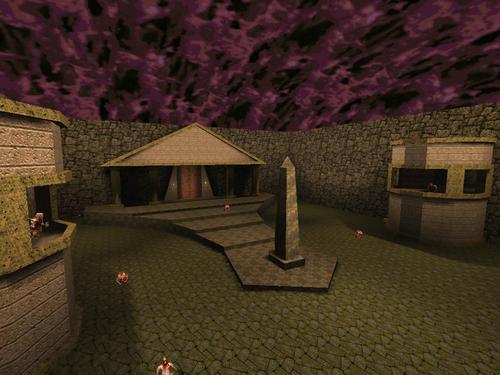 I gave up on this, which I hardly ever do. Finished the first level, only to be shown in the end-level view that I'd missed a whole area completely. Went back to look for it and couldn't. Started the second level and couldn't figure out how to progress after the church. Realised I wasn't having any fun. Sorry to be so negative, but those are the facts.

Played on skill 2 (found skill 3 door after completing the episode). Missed 1 or 2 secrets.

This is an episode based on a hub like layout, where all three maps share a big central room, but not the skill selection map, which has some not usually seen type of architecture..

Good pack overall. Begins in a bit cramped rooms and corridors and harder than ID maps, than can discourage the player. This changes as the player advances through the episode, with big scaled rooms, like the one in the screenshot, and way easier combats.

Progression is based on pushing button to open doors. Brushwork is around the average, with many rooms based on realism, layout is loop shaped, with many secrets and side areas, combats are varied, with no unfair combats, as far as i can remember. Ammo/health/armour is well placed and in numbers below those in ID maps but adequate, with as usual, a bigger breather as the episode advances, reaching the usual number in ID maps at the third map. Stands out the placement of several non-secret, non-hidden rings of invisivility, and that there is many weapons of each, except the LG, for those that missed them. Secrets are fun to find, well placed and with adequate rewards. The modified monster was interesting.

About the church, the map gives a message about what to do, but isn't easy to see, as it is at the same place as an item.

Overall, i rate it 3+ for the amount of maps, and for the year.