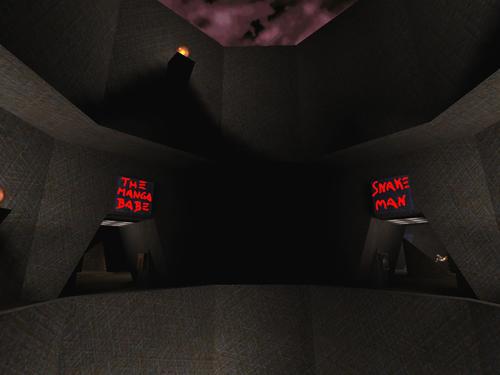 A tiny arena map to showcase four of the author's favorite custom monsters: Willy the spider, the manga babe, the snakeman and the bazooka babe.

You can use this arena to find out which one is stronger ;)

A pretty cool map to get acquainted with the most popular custom monsters of the time.

Setting up the monsters to fight with each other is kind of a hassle, and once you finally manage to provoke the fight, it will often be over before you even manage to get yourself to the control room to watch the bloodsport. I would have liked some teleport buttons to instantly take the player to the control room to stand a better chance of getting there in time.

There's also no way to spawn more monsters after the four monsters have been killed, so no huge battles or anything. You'll have to restart the map if you want to see some more action.

I also had trouble getting the other monsters to fight with the spider: They just kept walking at it without actually attacking while the spider just kept having its way with them.

A fine demonstration of how excellent Quake's original bestiary is. It's hard to invent monsters that really add anything. These four don't really do so.