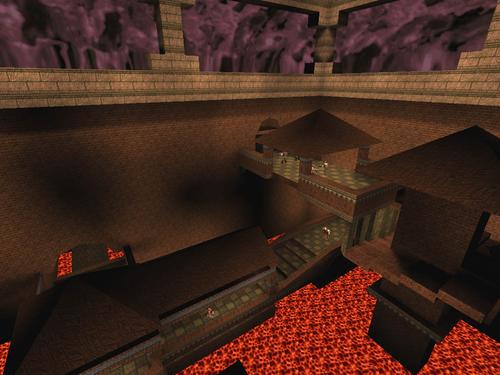 3/5 with 14 ratings
You can NOT add ratings
if you are not logged in.

i did enjoy the gameplay, but ran short on ammo.

IMO this is too plain and linear to be a classic, but it's nevertheless quite fun.

Weirdly enjoyable for such a strange, arbitrary map. Over-reliance on total darkness -- especially for the fiends-and-death-knights ambush -- but otherwise pretty fair.

Even the author stated that the map has just enough ammo and health to get by, so after reading that and dBAudio's comment, I went super conservative and used the axe whenever I could, so I had quite a bit of ammo to spare at the end. xD

I did play the map another time to see how I'd fare with a more normal playing style, and I didn't have much trouble there either. I did utilize infighting some amount, though. I played another time without finding the unofficial GL secret, and I might see a situation of running out of ammo if you utilize no infighting and shoot sloppily.

The map is rather plain, but it doesn't look as bad as the screenshot here makes it seem. It has some pretty cool architecture here and there, especially the end arena. The gameplay flowed pretty well for me.

However, leaving secrets unmarked really makes a map seem disproportionately cruder than it is, and maybe that just barely gives me an excuse to lower this to a 3/5 rating.