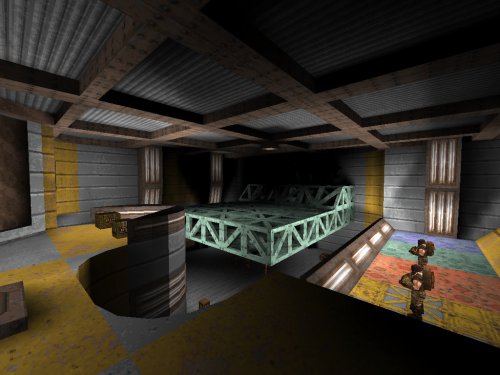 Small tp-industrial-textured base map. The map source is included.

Enjoyable enough, but very primitive -- looks and feels like a 1997 map, not a 2017 one. Progression is arbitrary, combats are poorly balanced. Sorry, Hexcalc!

In terms of layout the map feels a lot like Hexcalk's first map (Peripheral Fundament), actually. I think your own description at Func_msgboard of it being "a marvel of interesting artworks" is quite fitting. It feels like a random collection of rooms with experimental architecture, which, while fascinating to behold, make it feel quite chaotic.

Your item placement has improved, with ammo, armor and health being less abundant, so that's nice. Enemy placement is quite similar to earlier maps, with lots of emphasis on numbers. I think the formula could use a bit more variation. A map can still be challenging even with less monsters, with right enemies placed at the right places. For example, even a single fiend can be devastating in a narrow corridor, especially if the door behind you is suddenly shut in an ambush.

It would also be nice, if the monster placement would make sense "lore" wise. For example, finding zombies in a nice row in the middle of the large hall was quite an illogical place to be finding them. If they were found in a morgue or ambushing from beneath the slime, the placement would make more sense.

Nevertheless, as MikeTaylor said, it was still enjoyable enough, blowing up large groups of enemies into chunky gibs is quite fun. If only it wasn't mostly just that.