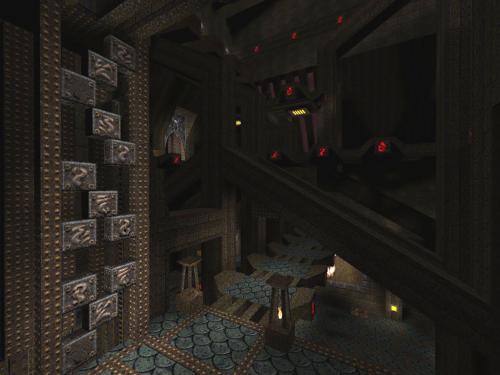 For Love of Evil

Three independent levels connected by a start map. (You might want to load each of them manually so as to avoid starting the map with all weapons from the previous one).

also, 4/5 because of some brush misalignments and sometimes strange texture usage.
Ubermann, rated this a 5 26 June 2010, 14:27
Exquisite maps.

Very elaborated maps with lots of detail but not "overdetailed".

Nice ideas implemented and incredible ambience has been achieved correctly.
Difficult could become high in many situations due to traps and ambush. Monster placement is also excelent. Don't forget to save occasionally.

I think that due to the complexity of the maps' structure, it's normal to see a pair ot three misalignments here and there. Nothing really important.
Zed, rated this a 5 5 July 2010, 22:48
A very memorable and atmospheric map set. I wish Brownie was bigger -- it seems something of a waste to be so small, unlike Voidscape, which possibly might have worn out its novelty if it was stretched out much further. Both of them are great little maps, but the star of the show is certainly the eponymous For Love of Evil, and it's actually something of a masterpiece of a Quake map. Large yet never sprawling, ornate and detailed yet never cluttered, the flow and sense of pacing is impeccable. Seriously, you''re missing out if you don't play this one. 5/5
hkBattousai, rated this a 1 6 May 2012, 12:05
Why your games are all problematic?
negke, rated this a 5 6 May 2012, 13:27
Don't downrate all the maps just because you're too retarded to run or play them properly!
Drew, rated this a 4 15 August 2012, 23:28
This is great. It isn't always the prettiest - and despite what some say it does get kind of cluttered at times. Not a big deal though, since the gameplay is consistently fun. Lots of big rooms with Ogres dumping grenades from above as knights and demons lunge at you. Plenty of in-fights ready to go, and there is also good use of lava and func_trains. One of the better netherworld train rides in Quake, I think.
So yeah - It's often less than beautiful, but it's very imaginative and pretty dynamic. There is a good sense of Hrim's love for Quake which comes from every pore of this map.

THe turtle maps: I'm not a big fan of the void one - I think it actually does go on a little longer than I'd like, and I had some frustrating moments. Worth a spin though.

The main map (same as pack title) is quite good, even though I had an issue in Fitzquake Mk V when the platform carring you over the lava and through the spike traps turned invisible for some reason. The other two maps I rather consider being some "nice-to-have" extras, but nothing really special or memorable. For me personally, it's worth one playthrough, but probably nothing I would keep in my collection. Anyway, nice hub with three maps.

Well constructed - nice on the eye and immersive game play...5/5

"For Love of Evil" is probably my all-time favorite runic map. The detail and originality in the brushwork and texturing is very impressive, and the monster placement is near-perfect, very tough but fair on skill 2.

By the way, it is possible to play certain parts of the level out of order. The path to the megahealth secret seems to require some clever jumping, but with some equally clever jumping in the same area you can actually get behind the gold key door without having the key. Progressing from there still requires that you find the key and go through the door normally, and it doesn't break the level, so I wouldn't even consider this a quibble--just an unintentional bit of added nonlinearity.

I don't know what the person who wrote the description was high on but returning to the start map strips you of your collected equipment, so there's absolutely no need for manual loading. Speaking of the start map, it is kind of a mixed bag. The nightmare access is a little on the nose and could have used a bit of a harder puzzle. Some of the brushwork feels rather crude, like that square teleporter brush which corners stick out of its round frame... I mean come on! Fixing that wouldn't have required much work. On the plus side, it is a bit of a precursor as the entrance to each map is built in the style of those maps, something that only became more common after Arcane Dimensions, years later.

I didn't like Voidscape one bit. It may be quite original for a void map but that's about the only positive thing I can say. The geo is confusing as you don't really know what's supposed to be a path or not, and walking on the shoddy rockwork is kinda perilous. You can also easily bypass the SK door. There's little to no cover to evade the voreballs and combat in general feels haphazard and unrefined. Also, the map looks rather ugly. I can't honestly rate this a 1/5 because it is playable and doesn't have any major game-breaking issues, so 2 it is.

Brownie, on the other hand, is pretty cool. I dig its dark castle look with rarely used textures and it plays significantly better. One flaw though is that you will most definitely need the one secret for the final fight unless you decide to be a coward and cheese the monsters from above. 3/5

There's little to add to what the others have said about the main map. It's a solid metal map, not the prettiest but OK, with plenty of secrets to find but not required for survival. One nitpick is some invisible walls preventing you from exploring at will. If you want the player not to break the flow of your map, put something there, not an invisible wall! Other than that, it's all good. 4/5.

I decided not to do an average of the notes because both turtlemaps are negligible appetizers next to the main dish, so the final note focuses on the title map alone.