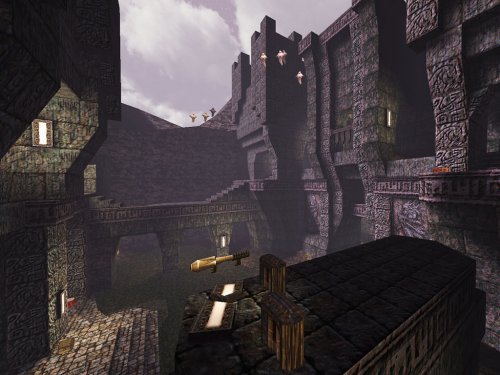 Very beautiful -- so much to love, and like several of the other sm175 maps, it beggars belief that this was a speedmap. If I were to quibble at all, it would be to say that after the exploration, the ending was anticlimactic: too easy to just rocket all the death knights and (especially) the fiends at ground level. I felt that one more big combat as you tried to open the gold-key gate would have been appropriate, as well as giving you somewhere to use the quad! But this is pithering. A fine map, well worthy of 5*.

Gonna play this today, but it's kind of a bummer that it seems a bit easy as you say.

That's Sock's play on the map name since it's his own re-imagining. ;)

I found myself feeling quite challenged by this map, which I really enjoyed. There was significant ammo scarcity, but at most times I found myself either about to collect another much-needed pickup or able to switch to an unconventional weapon such as the LG to finish the task at hand.

The traps were also great fun, firing slowly enough to be approachable and passable with patience, but also encouraging he player to step lightly even as they're trying to fight through such areas.

I especially enjoyed the beginning of the map, with the enemies charging the player rather than waiting to be found as you venture into the castle. Being repeatedly pushed back as you try and step through the entrance really helps to reinforce the idea that this is a challenging map, which I really appreciated.

Speaking of challenge, I think my primary issue with this map would have to be the enemy count towards the end. Spawning such a large number of knights, fiends and shamblers just as the player is completing the level makes for a fight that is easily overwhelming, but because of the open nature of the level I found myself escaping it and going on a fruitless search for supplies as I tried to figure out how to approach it. I ended up tackling it in a rather anti-climactic way, using the RL to dispatch the fiends and letting infighting do the lion's share of the work with the shambler and knights. (A death knight killed the shambler! Albeit with a bit of help from me, but still!)

That was map 10/10 right before the ending. It took me 5 min to understand that i should use golden key on the bars. It ruined experience a bit. You may want to put some signs for dummies like me after. Great map tho, solid 9/10.

I completed a sequence, now what?