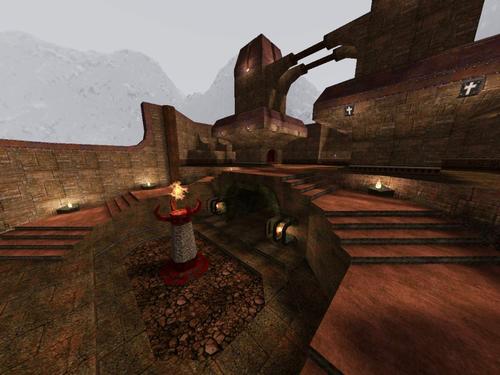 Bastion of the Underworld

Q3stone/metal styled fortress of epic scale, with a few new monsters in lots of horde combat (about 300 monsters in total) and othe custom gameplay additions.
Awesome map, definitely a must-have.

I only see two big drawbacks: the lack of a feeling of wholeness in the open areas, that seem like separate plain boxes. And the horde combats in open areas, where theres too much room to move and you can remain unscathed most of the time. Those two have being solved nicely in kinn_marcher.
MikeTaylor Registered, rated this a 5 26 November 2013, 11:13

A sensational mapping achievement, which I wouldn't have thought its author would ever be able to surpass ... then along came the Marcher Fortress, which is even better. Still, this is a very sold five: if we were marking in percentages, it would be up in the mid-to-high nineties.

The architecture is brilliant, and were that the only relevant element, I could easily give this a 5.

But sadly, like AAS above, I also found the gameplay boring (it felt very much like "kill all monsters in room 1, move to room 2, kill all monsters, move to room 3", etc.). One could argue that that is essentially what one does in every FPS, but here it felt particularly stilted and artificial. There were some nice moments, though, like the sacrifice to the gods and the fiend trap, but not enough to redeem the entire experience.

In addition to that, some of the monsters felt very out of place, in particular the re-purposed Quake 2 enforcer (along with Quake 2's radioactive barrels – in a medieval fort?), but also the base enemies in general. The large blue-ish monsters looked very amateurish in comparison to the beautiful setting.

Overall, as lovely as the architecture is, everything else just seems rather rough and unfinished – like a partially successful trial run before the masterpiece that is The Marcher Fortress.

MikeTaylor: Thank you for responding to my comment. Perhaps you are right; I can certainly see why you thought a 3 is too harsh. For what it's worth, I was wavering between a 3 and a 4. I would not necessarily consider a 3 the equivalent of 60%, though – the downside of a 1 to 5 scale is that one cannot be as precise as with percentages.

I appreciate your passion for this map and I do think that the author is immensely talented; this just does not strike me as a well-rounded work when considered as a map to play through (as opposed to a virtual setting to admire).

Fortunately, too, my rating is just one among many and won't change the fact that many others, like you, regard this map very highly.

Take into account that the rating in this website isn't done like that, with percentages. Check the ''Help>Map Terminology'' section, and go to the bottom of it. Then you will understand the ratings that are given to the maps.

Cocerello, I assume your comment is in response to MikeTaylor's comment. I have always kept the descriptions in the Map Terminology section in mind when rating maps (plus subjective enjoyment, which I believe plays a significant role in user ratings as well, as opposed to editor's ratings).

Even then, though, it is very hard to be precise with just five possibilities, and one person's 4 might be another's 3.

By the way, Cocerello, I have read quite a few of your comments on this site, and I usually find them very insightful and well-argued (even when I do not necessarily agree). Thank you for that.

Very nice map, I found quite interesting the mix between modern-like enemies like soldiers and medieval ones.

The only complain I got is I do not like the minotaurs enemies.

Am I the only one who thinks that these Quake 3 textures looks better in Quake? They seem a lot more crisp.

This map looks beautiful and the hordes.. well thank god for Save / Load :D

Replayed this for the LULZ. So much fun, even when the geography doesn't necessarily make a great deal of sense. And one of those rare example of the Quake-level climax that is sheer joy to play rather than a grind to get through.

Kawen, I just do a rocket-jump for the last secret. There may be a better way, but that's good enough.

But I never found the way to the red armour that you can see through the bars in the corridor just off from the meat-grinder area. Does anyone know the secret?

Not quite as visually impressive as the Marcher Fortress, but I feel that it plays a little better.

Solid map, but I have to agree that Marcher is miles ahead in the gameplay department. The final series of fights in particular are really easy to cheese, and I'm not too fond of the new monsters. Still, not a bad map by any means.

A jaw dropping map, best map ive ever played. 10 out of 5, thats how good it is.

Killed 321\321 on skill 3, but can only find 1 secret, others i see, but cannot get to them.Pressed every thing that looks like it should be pressed or shot at, shot any patten changes in the walls,still no luck, but its a 5 star map