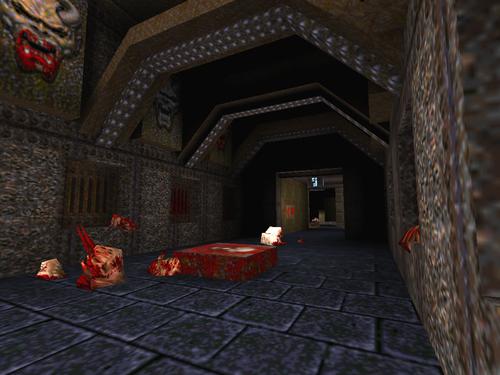 3/5 with 13 ratings
You can NOT add ratings
if you are not logged in.

All enemies killed. Played on skill 3 and 1.

This is a small sized level, OK lighting for the time except for some dark parts, with lower than ID maps quality in brushwork but not too much, tree shaped layout that depends on keys to open path and gives plenty of room to go and explore each branch. Gameplay is straightforward with usually no breathers, with some unfair shambler teleports or ambushes (one with way more than enough firepower to take it down) and a demon in an unfair placement, in general placement of enemies is a bit repetitive but the variety in rooms and lenght of the map make it so it isn't boring, overall the difficulty is a bit over ID's EP4 skill 2. Placement of items is good, quantity of armour and health is a bit less than ID maps and due to the amount of ammo, if the player intends to kill all the enemies, he needs to rely on monster infighting, that due to the amount of enemies at once in many combats, isn't hard to achieve. The traps are OK and need to be played cautiously to survive them.

Given the description i expected to die several times but it was disappointing in that regard. It is hard, there are some unfair ambushes, but it isn't even close to outrageous, so i never were at low health and only died at one of the traps because i rushed. I recommend to play cautiously and save the nails for shamblers and the explosives for groups and all will go way easier. In particular, i liked the fight, brushwork and ambient after the SK door and the freedom to explore the paths for quite a long way.

This map surprised me in a very positive way. I expected super cheap gameplay, but I played in a similar style as Cocerello: nightmare difficulty, cautiously, sparing ammo and using monster infighting. I died once in a trap, because I was just a little bit too slow. Otherwise, slow and steady seems to win the race here.

The level has the 90s map charm to it with its mixed (and occasionally misaligned) textures and brushwork that goes off the "correct" scale. In this case the weird scale was apparent in this one large corridor with extremely steep staircases with tiny steps.

The architecture is nice for its time, and in addition to the SK room, another highlight would be the GK room, in my opinion.

I'd really like to rate this map 4/5. With a cautious playstyle it's fun and interesting to explore. However, the lack of polish shows just a little bit too much, which is why 3/5 it is.

Like the previous commenters, I found this surprisingly enjoyable. A few parts of the map were obviously influenced by e1m6, but the overall design is different: the layout is less compact and efficient, and it has a mix of metal and wizard textures instead of being a pure metal map. I agree with Esrael about the hallways and steps being crazily out of scale.

Parts of this are crude, and it's definitely a product of its time (early '97), but nonetheless it's pretty fun.

Decent quake map from 1997, had trouble getting through the level after getting the gold key as the map displayed there were two gold keys? I had to noclip to get out of the area. The rest of the map was pretty well done with nice texture work and use of shadows to provide a dark mood to the map. I would give this quake map a three out of five rating and say it is worth a quick play through.

Beside the ridiculously steep stairs (which I think were intentionally done and actually made things interesting) and a few misaligned textures, this is a decently constructed map. The ring of shadows is really useful in this level! My biggest complaint is the lack of ammo. I had to run past the 2nd to the last shambler in order to have enough ammo for the final battle and that included the benefit of infighting. Also, some areas were pitch black, but at least there was room to move around in those parts. Worth a look!