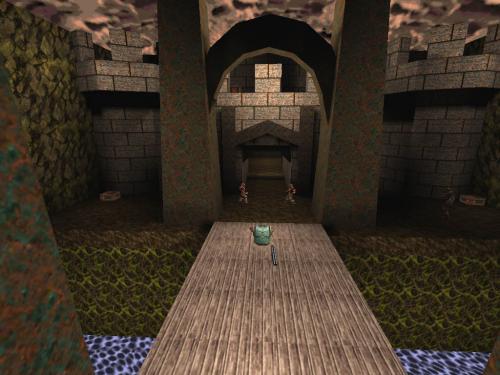 Medium-sized medieval fortress. Comes with a start map and features a few new textures as well as a custom SNG model.

Really wonderful architecture: one of the most realistic Quake castles I've seen, and incredibly impressive for such an early release. Detailing is a bit sparse, though: a few torches at the very least would have been nice, and perhaps some medieval weapons scattered about (I can understand why there are no demon faces and crucified zombies, though, as that would detract from the realism of the setting).

Gameplay is fairly straightforward and the map is sadly somewhat underpopulated: it's just begging for several more knights patrolling the grounds, and maybe another fiend or two. There are no monsters magically spawning in, however, which helps maintain the realism of the setting.

The new super nailgun model, though unnecessary, is well done and a nice touch (rather nonsensically, though, you get the regular nailgun just before the final battle, long after you've picked up the super nailgun).

I found this absolutely mundane, arbitrary and unrealistic, and grotesquely underpopulated. 2/5 is the most I can give it, for its basic competence. Amazing how Icantthinkofaname and I can look at the same map and see it so very differently. (BTW., Icant, you didn't rate this -- an oversight?)

I killed everything I saw, including in the secret area, but only ended with 43/46 monsters. Anyone have an idea where the other three are?

Heh, yes, it is interesting how we sometimes see things so differently.

Thanks for pointing that out, but actually I'm still mulling it over; should add a rating at some point. There are a few maps I've commented on but have not rated yet for the same reason (e.g. sksp2b and wca, and I've just recently rated insane01, though I left a comment some time ago). On the same topic, though, do you realise you have not rated janitor1?

As for the monsters, seeing as you had the same problem in janitor1, masque and drysorrow, my theory is: word has spread among them and now they're in hiding. :)

Seriously, though: I did not notice anything myself, but maybe it was because of the infamous fish-count bug? There are three rotfish here, so that would add up. No idea what happened in drysorrow, though, I've played it twice myself a while back and got 100% kills (or very close to it) both times. Didn't notice any problems in janitor1; haven't played masque yet.

Ha, no, thanks for pointing out my failure to rate janitor1. (Of course I did state my rating in the comment, but now it's done properly.)

Hope you enjoy masque as much as I did!

Spirit, there are currently no "Additional Links" for this release. Maybe you want to add these (although now that I've linked them here, perhaps it's not necessary?): Crash's review: http://www.quake2.com/crash/levelsl.htm and [Kona]'s rating: http://www.electricescape.com/etherealhell/index.php/10-ratings?limitstart=0

Monster count is probably the fish, the reQuiem engine automatically fixes this. ;)

Timestamps in the zip must be wrong.

Given its shortcomings and how I've been rating other maps, I guess I can't give this more than a 3.5. [Kona]'s rating of 74% seems about right.

i agree with icant. more detail would've been great. i thought the layout was decent except the nailguns & some monster placement, which was underpopulated. but for 1996, it's decent to me.

This map gave me 12 minuttes of good fun. Navigation was good. I saw some interresting arcitecture and the end was nice and challenging. Especially since I didn't pick up the lightning gun until everything was killed ;)

Minuses:
- not enough detailed
- too hard (not enough ammo even on easy)
- i didn't found "nightmare" portal on the start map (although, it might be plus because of previous...)
- outdoor is very cubish
- only one secret
- awful model of SNG!

Ha, what a popular map. I thought it was alright. Pretty ugly somehow but good gameplay.

I like the architecture a lot, but it lacks a bit in detail. It was released in 1996 though, so I'll give it some slack. I like the new SNG model, it's pretty satisfying to use. The combat is also rather fun, I especially like the last battle because there's just enough cover to be fair but just little enough to be challenging. Very well balanced. It could have used two or three more secrets, but that's really my only complaint. The start map is pretty cool visually too. I definitely recommend this level, it's rather good.

Quite a good one. For its time it is a solid 4, or maybe more.

You can summarize the brushwork as simple but effective: there is no impressive brushwork, but it is good for its time, and more importantly it is coherent with the theme and between themselves, and architecture fits it well, even though sometimes is a bit cramped. Decent combats but nothing special, decent except maybe the last ones, as it was easy to snipe everything. Good amount of enemies.

Liked the side areas at the beginning, a well executed idea. Good amount of ammo/health, not overloaded, but enough for many missing shots, at least for hard, and 2 GAs in the same room which i suppose was an error.

I quite enjoyed this one. Beautiful architecture and nice gameplay (although it could've used a few more enemies). I agree that the new SNG model is terrible, though. The main downside for me is that there is only one secret and it is painfully easy to find. The last battle is the highlight of the gameplay, but the whole map is fun to play through. This is amazing for 1996. 4/5

As a pack that came out in 1996 I'd say this is actually not bad at all. Judging the map by todays standards is completely unfair really. I think the replacement super nail gun is a bit silly and gameplay-wise it was fairly boring. A solid 3/5.

The Ancient Fortress on The Quake Grave

It's a little disappointing that this is Lombard's only Quake map (Unless I missed something?). The fact that he decided to included some custom menu graphics and a custom Super Nailgun (no matter how you feel about the look of them.) and a custom start map shows that he was really passionate while he was building this map. I also think the potential he had for future maps was huge if he would've kept going.

That said, the map is decent for an old map. There are some questionable design elements from my point of view, like having 2 key doors where they are just kind of ping-ponging you back and forth to each door. Or the last room just being chock full of enemies without much thought to the flow of the room and enemy placement/traversal. However, the level is competent and does contain a few fun areas. The really enjoyed the look of the library and regardless of how the last room is set up, it's a strange yet interesting fight.

I'm not sure that this is a recommendation to check out but I think it's a great early example of some customization in Quake.

there is more from Mr. Lombard: https://www.quaddicted.com/reviews/lomgoat.html

Thanks starquake! I'm going to have to give that one a go soon.

A surprisingly impressive level from the early days of Quake mapping, with a few custom textures and even a custom super nailgun model. Easy to navigate and some nice architecture, not terribly difficult aside from a rather intense finale battle. Probably the best early map I've played so far.

I liked the way that the gold key and silver key were laid out, they were hidden in a long narrow hallway and you can jump over a balcony to get to the gold key door. I died at the end bit though with the two shamblers and the spider thing.

Quite a solid package we have here. I can tell a lot of effort was put into this. I'd say the map looks better than it plays, although the final showdown was quite fun to play. Too bad there's only one (obvious) secret.

It seems that changing difficulty doesn't change the number of monsters for me. Anybody else having the same problem?

Underdetailed, underpopulated, with a laughably easy secret and a completely flat layout... but nonetheless quite fun to play.

Replayed this and found it more impressive the 2nd time around. As mentioned, it;s under-detailed--but understandably so, for a map that came out a few months after Quake was released--and despite that, it has a lot of realistic touches that give it a definite atmosphere. I'm thinking particularly of the library, but also the way the hallways are designed. There's also a slight bit of non-linearity. Pretty good for its era.

well designed medieval castle map from 1996 with decent combat scenarios. Enjoyed the new sky texture however did not care for new super nail gun model. I would recommend playing this map and give it a three out of five rating.

It's chunky and unrefined, but it gets the job done. Keep in mind that Quake had only been out for a few months and the early editors were unforgiving.

The map's solid: the layout is not confusing, the environment is varied, and the ending provides a pretty decent challenge. I do think that the backtracked areas could have been repopulated and the last fight could have been better coordinated, but this is good for an early '96 map!

P.S. I yanked the main map out of the pack, because I could care less about a custom weapon model and a skill select map. However, the fact that he included these shows that he had some serious ambition.

The first map in quaddicted with a start map and first map to have to put the map in the quake directory to work, really good level design but i cannot find the 3 last monsters 43/46.

@JuanchoES There's a flaw in Quake that causes it to double-count rotfish when calculating how many monsters are in a map. This map has three rotfish, so it says there are 46 monsters but there are really only 43. You got everything.

oh, thanks for pointing that out JMP