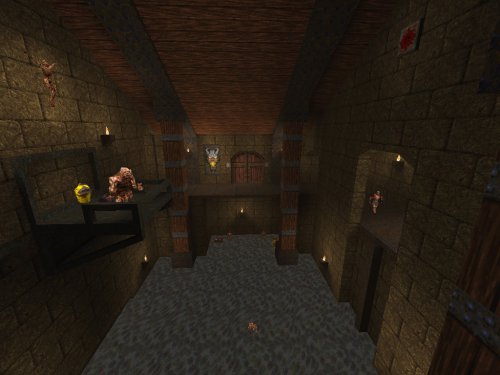 Nice map, reminds me of original Quake very much.

Good oldschool Quaking. In many respects (from layout to architecture, as well as theme) this feels like a partial remake of E1M2, which added some interest.

I didn't manage a 100% run, probably because some of the secrets contain monsters and I didn't manage to find all of the secrets. It wasn't apparent what the shootable buttons in the final arena were for, so I'm still not sure if they opened a secret that I just didn't find, or they somehow allowed me to progress through the end-gate in addition to the two push buttons. A bit more polish and signposting would help in this respect.

The shotgun secret was pretty pointless, as there are only two knights between it and the non-secret shotty, so that could have been better planned. I enjoyed the armour secret within a secret, as it's only really findable thanks to much earlier exploration, so that felt rewarding.

Simple, and too easy -- way over-provisioned with health, ammo and armour -- but a lot of fun. Like Evan says, it has a strong Original Quake vibe, including homages to a couple of places in the original episodes. One of the secrets that eluded me, I am pretty sure I found: in the partly-flooded L-shaped chamber where the walkway above the water has the Gold Key, one of the underwater coffin alcoves has bricks lying vertically instead of horizontally as in all the others. That HAS to be a secret, right? But I can't find a way to get it open. Anyone?

This was super fun! I love how much of the level is made up of secret passages and whatnot, but they aren't too hard to find or anything, so it has a great sense of exploration. The Castle of the Damned references were great, too.