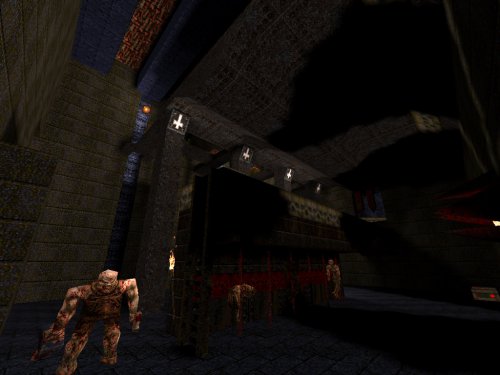 Note: This map requires Quoth and an engine port with increased limits.

Nice map, but very tough on skill 2. I had to godmode through the final arena to survive after a quicksave/quickload-filled grind. I'll need to replay this on skill 1 to enjoy it more. The lack of thematic coherence doesn't bother me: it makes for a quite surreal experience reminiscent of Tronyn's Nyarlathotep or American McGee's Alice.

Secrets are fairly easy for the most part (I never would've found out how to access the plasma gun if it weren't for Negke's hints on the Func_Msgboard page, though: this one was a bitch!) but the quad inside the cage still eludes me. I suspect the glowing demon face below is the door but I can't find a way to open it.

Very old school. Played this on skill level 2. The game play was fast through out and power ups were plenty and ammo was plenty. The monster placement was plenty as well. You think you got this map figured out until you get to the end with the combat arena. HOLY CRAP!!! This kicked my rear end a-plenty! I can't count how many times I died! The over all arena was such that the more you keep playing it, the more you start to figure out how to go about beating this insane area. Gladly though, I finished the map with 8 out of 13 secrets. Very well done and I would rate this 3.5 BTW, Lots of saves need to be used to get through this level. My first map was "INSANITY", maybe you should borrow that title for this map, it is more fitting here!

Thanks for the comments.

I may have gone a little overboard with the final fight on skill 2. Skill 1 is a little bit more restrained. ;)

Yeah, the fact that it's so very easy to fall in the void doesn't help either. I like this kind of stuff in "normal" Quake play, but when you also have to juggle a shit-ton of tough ennemies sending everything they got towards your general direction, things become sliiiiiightly too hectic for me...

For some reason I felt like thieving the hell out of that place.

Heh, with a name like yours, how would you not? ;-p

First of all, I like the atmosphere created here...a real macabre of unknown demonic ruins. The initial sight is great with being on the cusp of madness and getting a brief glimpse of the outdoor space.

It seems almost immediately the theme falls apart or at least gets confused to itself. I can see what you were going for, but some things just feel like mish mash rooms weaved together. In any case, one theme is blood and there is plenty of it not to mention creative uses for the substance. Secrets are cleverly placed and some made me go: "That's cool". which means it's a good secret! Swimming in, over, under and on top of blood helps tie a theme just dying to present itself.

Gameplay didn't leave anything too memorable but there is nothing wrong with killing mobs of demons! The vore trap, although a fun idea caused me to to play a long game of peek-a-boo as I did not take time to find the "kill switch" considering a mass of vores suddenly spawned in front of me! The final battle, as others stated felt like a bit too much of Spawn-things-into-your-face and have some void while you are at it!

Lighting is very flat, sort of feels like everything is the same brightness...it is a bit strange.

Where this map shines, and the 4 star rating comes from is the great original work here. Although sometimes arbitrary, I haven't played a map quite like this one with it's direct goal of being a space to kill things and explore twisted visuals. Great map title as well! Keep mapping Lane, I sense great things!

Well, I finished on only 139 of 173 kills -- and I killed everything. So somewhere, 34 monsters successfully hid from me. I was down to 6 health by the end (and in fact only one health after I dropped down the exit tunnel and took the fall damage!) which is always satisfying. I found the quad secret in the final battle, but only after having killed everyone: it's just too frantic to go hunting for secrets before that! That was one of nine secrets I found, so four of the 13 escaped me.

This is a very ambitious and largely successful debut map from Lane Powell, and it's left me hungry to see what he will go on to do. I've marked it with a rather harsh three stars (I would rather have mrked it 3.5 given the choice) as it was just a bit too episodic and arbitrary, and some of the sections looked unfinished. But I love the sheer creativity of it all.

The vore trap, although a fun idea caused me to to play a long game of peek-a-boo as I did not take time to find the "kill switch" considering a mass of vores suddenly spawned in front of me!

Wait -- there's a kill switch? Where? I just came back later when I had the grenade launcher, and blew 'em all up. (Not that that wasn't also satisfying.)

By the way, how many people read the reviews? Do you all know about the page https://www.quaddicted.com/reviews/log.php?number=20 that shows the 20 most recent comments (and the 20 most recent tags, ratings, maps and demos)? That's my entry-point to the site -- I like t osee what's happening, and what others have thought about the maps that I've played. (You can wind the 20 up as high as 50, by the way.)

Yeah, I try to read every review that's posted. :)

Thanks for the comments. The feedback I've received for this release has been very helpful and encouraging.

a great map overall i think. once the player is told 'no way back,' everything became obscure & obtuse, with a hint of DOOM thrown in. personally, i appreciate the level of distinction that i saw in the 'theme' of this map. on skill 1, i'm pleased to say i made it through the final arena with little trouble, even though i found the quad damage at the end. i'm proud to say i found the kill switch for the multiple vores without any trouble! 9/13 secrets, 131/154 kills.

did anyone else get the gold key without following the 'intended progression?'

Loved this map! Played on nightmare and was very fun. I liked the level design a lot, great atmosphere. Found only a few secrets (about 3) so I'll replay it soon

Was alot of fun on NM. If you know where to get the quad in the arena you're pretty much set.

It dosn't work with the injector. I used the command line: C:\QuakeInjector\Quake\dx9markv.exe -game Quoth +map lpqsp1 Please fix the bug in the injector.

Should be fixed, thanks!

Well, the final battle is pretty tough, but it can be skipped entirely by just dropping down to the exit hole. The barrier leaves enough room for Quakeguy's body to walk through, lol.

Jugador is right, the last battle is extremely easy if you want it to be. And unless I missed something, it seems the journey to the silver key can be made much easier as well (I only realised that after emerging from the depths after the slaughter).

This map is all over the place, quite rough around the edges and sometimes seems to be an experiment in exploring different themes -- although I understand mixing them is a difficult exercise. For all its flaws, it is extremely fun, and I enjoyed the journey. Thanks a lot, I'm curious to see what you're up to next.

dbAudio: yes, it's very easy to obtain even in Nightmare (special thanks to Ogres and infighting).

Thanks, glad people still enjoy this. I do have one more large, mixed-theme WIP map that I'm working on intermittently.