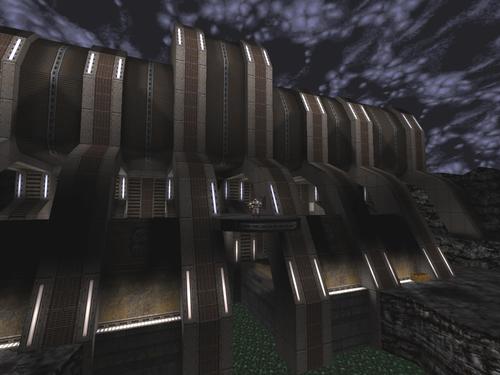 Large, professionally constructed mountain base with Q2MP1 textures and some custom monsters.

This is one of the maps I've come back to and played again and again. Lovely construction, the progression tells a story. My only quibble is the stupidly hard boss fight at the end: instead I consider the level beaten once I get through the boss door.

This is one of the maps I've come back to and played again and again. Lovely construction, the progression tells a story. My only quibble is the stupidly hard boss fight at the end: instead I consider the level beaten once I get through the boss door.

i agree with MikeTaylor's quibble. other than that, nice!

The boss isn't that hard once you get the switch pattern down, but can get very frustrating and kind of breaks the level's pace. Aside from that is pretty much perfect, loved every single second.

What a great map. Love the progression and design. Very Quake 2 in style

So far this feels like the best Base map I've completed (I've done only part of Rubicon 2/Rumble Pack). Flow is superb, as are the Medieval enemy replacements. The brief platforming section (grenade launcher) stands out, as do the firefights with "The Five". Resource placement's very fair, progression lets you sequence-break here and there, and I feel the map telegraphs secrets just right w/o beating you over the head. Looks help, but above all this map's incredibly solid and makes enemies like Vores and Fiends more fun than I'm used to.

This immediately gets bonus points for having the best Chthon fight I've played in custom Quake. Projectiles move slower to accommodate semi-random aim, you have to pick up best and only armor to even start the duel, and you can practice lowering the coils beforehand to make dodging Chthon and repeating the pattern easier. I prefer either to dodge Chthon as an environmental prop or, in this case, an easier but still tense puzzle sequence. Worst part of the fight's when you fall into the pool and can't get back up (correct me if I'm wrong).

I was impressed of final battle where u need to push buttons fastly to violate oddity of number of downed electrods. "How to use ingeneery against of mathematical law".

Thanks for the hint, Vasya shkolnik, it is spot on. That (nearly) final fight also got me frustrated, and I don't think either that you can get out of the pool once you fall in.

Yeah the bossfight with the button puzzle needed a bit more tuning, particularly in that getting knocked into the slime is game-over.

Still: a five-hearts classic. Good use of new textures, sounds, and enemies... it feels fresh but still Quake-y and coherent. The real star though is the winding and slightly nonlinear map layout, just a lot of fun to work through all that Quake-2-ish structure and terrain. One of the best base maps out there.

Nice map! Great action and the main event: the boss... which is a remix of Chthon battle, only the beast is green and the button-pressing is hard. Solving the boss puzzle can take longer than finishing the map itself! Still, a worthy mod!

Alright, so here's a detailed explanation on how to solve the puzzle (SPOILER):

There are three buttons on level 1 and three corresponding electrodes. There is one button on level zero - the activation button which runs electricity between the lowered electrodes. To defeat Chthon one has to lower all three electrodes and run electricity through them, getting Chthon, in the middle, electrocuted. Taking the red armor will trigger Chthon.

The button pattern works like this: each level 1 button acts upon the two opposing electrodes by toggling them between the raised and lowered states, with the caveat that each electrode needs to be either raised or lowered and not in the process of raising or lowering for the button to act upon it.

Step 1: Let X and Y be two of the level 1 buttons. Press button X. Electrodes Y and Z will begin the lowering process;

Step 3: Quickly move to and press button X while electrode Z is in the raising process. This will raise electrode Y, rendering both electrodes raised.

Step 5: Move to floor 0 and engage the activation button. If Chthon not dead then go to Step 1.

Hint: One can trigger Chthon just before the final lowering of the electrodes and then quickly engage the activation button to minimize the time spent in exposure to his attacks.

The custom enemies present in "Concentric Devastation", are amazing - it probably makes for a better 'Quoth' arsenal, than a good amount of content the current version of 'Quoth' does have in this regard. 'Quoth' - you take notes! The aesthetics and spatial design of "Concentric Devastation", as well as the colour tones applied, are superb, for the theme chosen. The difficulty level scaling, is fair - sometimes oscillating towards an overkill on higher ends of the spectrum - the resources, may also become scarce.

The entire experience, encapsulates 'Quake' in a nutshell, if to focus exclusively on the industrial prism. The gameplay flow, is quite intuitive, albeit not perfect. There are moments of wandering in search for the next step to take, owing to the size of the map. Aspects of non-linearity, do spice up the notion of possible confusion, underscoring the good quality of design nonetheless.

The final or near-final battle, stands as an upgraded "Cthon" encounter - known from the classic campaign - assuming certain altered themes. The enounter, is now enriched with logical puzzle elements, that could possibly pose certain difficulty in solving. Fairly accurate attacks of the new "Cthon" - for this category of entity - followed by environmental hazards, do not particularly help swiftly resolve the battle; which may eventually become of annoyance to those less patient among 'Quake' enthusiasts. Having the "Cthon" somehow defeated, it is not the end of a mission, though - at least, not completely; which, in turn, does bring some novelty in the way of 'Quake' level design.

Altogether, a very solid map, professional in appearance, offering a wealth of gameplay - the flow of which, notwithstanding, may appear disrupted sparsely with certain difficulty spikes of various nature.

To this moment, I am uncertain whether - in order to defeat the red enforces - one ought to shoot at the sparkles or away from these; although it seems that sparkles, indeed is the weakness. Not that the clockwork for the latter, is very precise. For the "Cthon", I still doubt whether I really do know how to solve the puzzle - all I know is that it takes to revert in a while.